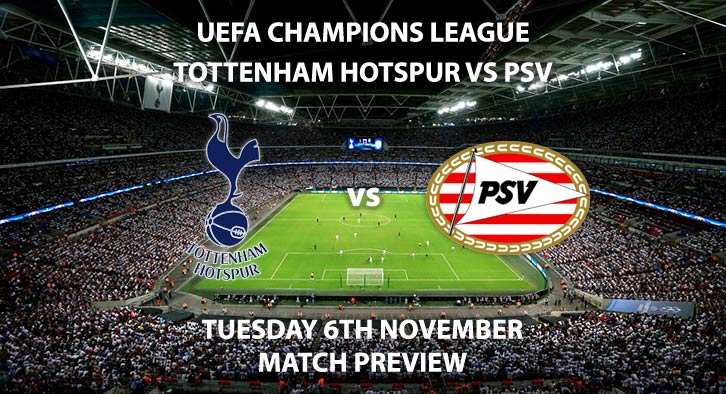 Tottenham vs PSV: Tottenham host PSV at Wembley Stadium, knowing anything other than a win will see them eliminated from the Champions League at the Group Stages.

After taking just one point from their opening three Champions League games, Tottenham know tomorrow’s game is a must-win fixture. They were denied a crucial three points by Luuk De Jong’s equaliser in Holland a fortnight ago after Hugo Lloris was sent off. The Frenchman will miss this match as a result, with Paulo Gazzaniga set to deputise in the captain’s absence. If Spurs are to progress they need three wins from remaining matches, to avoid dropping out of the Champions League. Dele Alli has been passed fit to play after missing their win over Wolverhampton Wanderers at the weekend, whilst Cristian Eriksen may also play after coming off the bench.

The Danish playmaker has been a big miss for Spurs as he looks to step up his fitness after injury. At the weekend, Erik Lamela and Lucas Moura both impressed, so it will be interesting to see how Mauricio Pochettino fits everyone into the starting side. Moussa Sissoko has also been a revelation in recent weeks as he looks to transform his career in North London for the better. In the league, Spurs sit fourth, five points behind league-leaders Manchester City. They have won four of their last seven games in all competitions.

PSV head to the capital knowing they also need three points to keep their Champions League dreams alive. They will be buoyed by their dramatic equaliser two weeks ago and will be hoping to inflict more damage on Pochettino’s side. Hirving Lozano proved to be a livewire for PSV, causing issues for the first goal after robbing Toby Alderweireld before scoring. The pacey winger is on the radar of a number of Europe’s elite clubs, having caught the eye for Mexico in the World Cup this summer.

Ivan Kruzliak is the referee for this game. The Slovakian official has averaged 4.45 cards per game across 73 matches. As a result, I would advise a maximum of 50+ total booking points for this fixture.

Tottenham know they must win this game, or they are out. This will show the metal of Pochettino’s men, who have had their mental resilience questioned in the past. However, I think they will get the win they need, with Harry Kane to step up to the plate.

Tottenham Hotspur vs PSV will be televised live in the UK on BT Sport 2 with kick-off at 20:00.

Odds and markets last updated on Tuesday 6th November 2018 @14:34 GMT. Keep checking back to see if there’s any updates to markets – the time stamp in the previous sentence for when we update tips on this page will be updated.