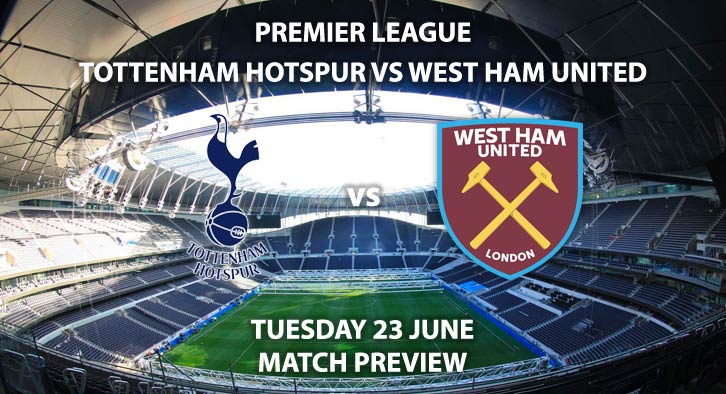 Tottenham Hotspur return to home soil for the second time in a week when they host West Ham United in the London derby on Tuesday evening.

Both sides will be looking to clinch their first win following the Premier Leagues return. Spurs were held 1-1 by Manchester United on their return, meanwhile West Ham were beaten 2-0 at home by Wolves on Saturday evening.

Spurs come into Tuesday night’s fixture on a four-game winless run in the Premier League, with their last win coming back in February away to Aston Villa. West Ham on the other hand have lost seven of their last nine in all competitions and are in the thick of a relegation battle.

Spurs were 3-2 winners in the reverse fixture back in November, which at the time was a winning start for Jose Mourinho in his first match as Tottenham manager. Son Heung-Min opened the scoring for Tottenham in November and is priced at 7/5 to score anytime in this one on SkyBet.

Spurs have won three of the last four meetings in this fixture and are priced at 7/10 on SkyBet to win in 90 minutes.

5 of the last 9 meetings between these two sides has seen four or more goals. Over 4.5 goals is priced at 7/2 on SkyBet.

West Ham have failed to keep a clean sheet in their last 10 consecutive Premier League matches, meanwhile Spurs have gone 6 without a shut-out. BTTS is certainly a market worth exploring for this one.

Craig Pawson is the man in charge for this one. The 41-year old has taken charge of 16 Premier League games this season, accumulating a total of 64 yellow cards and two red cards; an average of four yellow cards per game. November’s meeting produced five yellow cards between these two. This considered, I would recommend 30+ booking points at the very minimum.

West Ham’s Robert Snodgrass has been yellow carded in his last three appearances against Spurs and is priced at 12/5 on SkyBet to be carded on Tuesday evening.

This game will be televised live on Sky Sports Main Event/Premier League with kick-off scheduled for 20:15 BST on Tuesday evening.