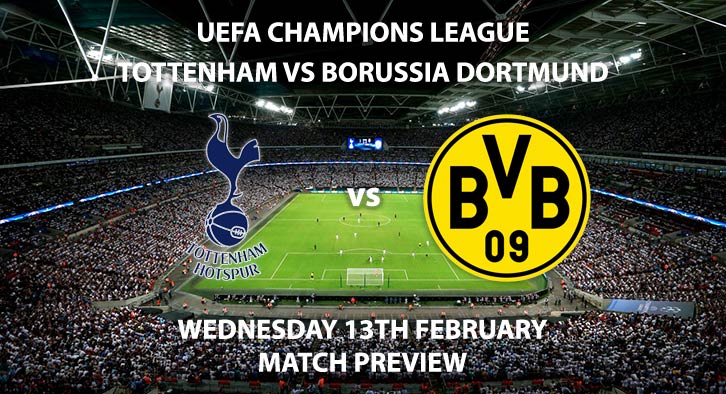 Tottenham will host Borussia Dortmund in the first leg a UEFA Champions League Round of 16 encounter this Wednesday evening.

The hosts scraped through their group stage qualification sharing just eight points with Inter Milan, only for goals scored to come to their advantage. Meanwhile, their opponents made lightwork of their group, topping it with 10 goals scored and just two conceded in six matches.

Tottenham are priced at 13/10 by SkyBet to win and gain advantage in this two-legged tie. Mauricio Pochettino’s injury headache continues with Harry Kane still questionable for the tie. His presence could be sorely missed as he scored four of their nine group stage goals. Hueng-Min Son is the home sides best chance at a goal. The South Korean has returned in the same fashion he left in before his international duties over Christmas – scoring goals. He also has a great record against Dortmund, scoring against them in their last three matches. He is 7/5 to score anytime and 4/1 to score first.

Their last four head to heads have been goal fests and have seen both teams scoring in three of them. SkyBet are offering 15/2 for both teams to score in both halves.

Dortmund are priced at 19/10 to win away from home this Wednesday. Dortmund not only enter this match on the back of impressive Bundesliga form, but also an impressive group stage. The German side kept five clean sheets and conceded just two – the least in the whole tournament. They have also enjoyed watching the likes of Jadon Sancho and Marco Reus tear apart defences. Reus is prominent in the Dortmund attack however is a doubt due a thigh injury. Raphael Guerreiro was in great form during the group stages and bagged four goals. He is 9/2 to score anytime.

The referee for this match will be Spanish official Antonio Mateu Lahoz. At this stage of the competition, yellow and red cards become rather frequent. Over 50+ booking points is 11/8.

Tottenham Hotspur vs Borussia Dortmund will be televised live in the UK on BT Sport 2 HD and kicks off at 20:00.

– The in-form Germans will cause the Spurs defence all sorts of problems. The London club already looked shaky in the group stages.

Odds and markets last updated on Wednesday 13th February 2018 @18:13 GMT. Keep checking back to see if there’s any updates to markets – the time stamp in the previous sentence for when we update tips on this page will be updated.

Remember to keep visiting the tips and preview area for further updates and betting previews around this weeks Europa League and FA Cup games.