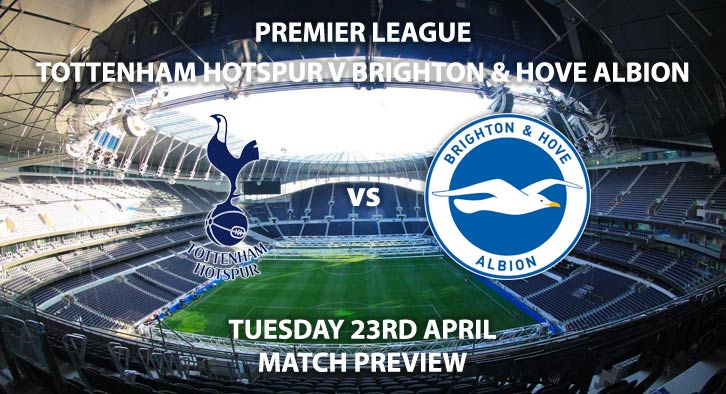 Tottenham vs Brighton: Tottenham will be hoping to bounce back from their weekend defeat and establish their place in the Premier League top four when they take on relegation-threatened Brighton.

Spurs went down 1-0 away to Manchester City at the weekend, although they could have caused another upset against the champions. Three days on from their Champions League classic, Tottenham almost hit Pep Guardiola’s side on the break again but were this time thwarted by an in-form Ederson. The silver lining for Mauricio Pochettino’s team was that they were not the only side to drop points this weekend. Arsenal and Manchester United were both humbled, whilst Chelsea drew with Burnley at home, making it a good weekend for Spurs.

As it stands, they remain third in the table with their destiny in their own hands. They only have a one-point lead over Arsenal, however, having played the same numbers of games, so they can’t afford any more slip-ups in their remaining four games. Tottenham have won every game so far in their new stadium (3) and are yet to concede a goal.

Brighton stopped the rot at Wolves on Saturday with a 0-0 draw. That brought to a five-game losing run to an end, at just the right time. Chris Hughton’s side have slipped alarmingly down the table and are now only three points above Cardiff City, although they do have a far superior goal difference. Gals have been the issue for the Seagulls. They have become too reliant on Glenn Murray and the Englishman hasn’t scored in his last seven games. Only Huddersfield Town and Cardiff have scored fewer goals than Hughton’s side this season.

Chris Kavanagh is the referee for this fixture. The Englishman has officiated 31 top-flight matches this season. In that time, he has accumulated an average booking points total of 34.8. Therefore, I would advise a maximum of 50+ total points for this fixture.

This game should be a fairly straight forward one. Although they lost at the weekend, Tottenham are in good form and have looked very strong in their new home. Brighton can’t score, or win, for toffee, especially on the road. Home win.

Tottenham vs Brighton will be televised live in the UK on Sky Sports Football with kick off at 19:45 BST.

Odds and markets last updated on Tuesday 23rd April 2019 @16:30 GMT. Keep checking back to see if there’s any updates to markets – the time stamp in the previous sentence for when we update tips on this page will be updated.