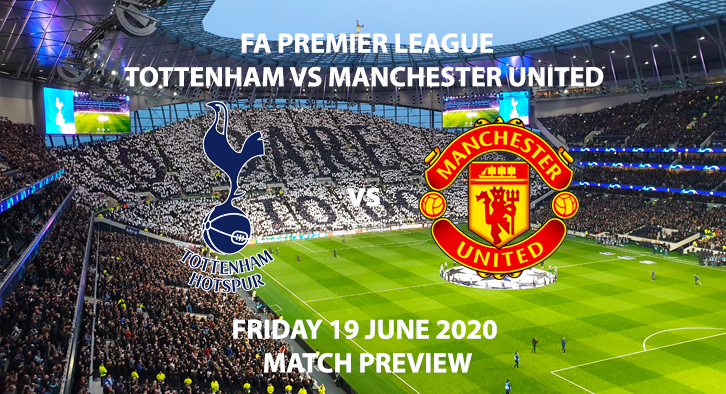 Tottenham host Manchester United on Friday night as two Premier League heavyweights take to the pitch for the first time since March.

Before the enforced break due to the coronavirus pandemic, the clubs were in very different form. Tottenham were without a victory in their last six matches from all competitions, losing five and getting a 1-1 draw against Burnley. Meanwhile, United were well in their stride having gone eleven matches unbeaten and triumphing 2-0 over their rivals Manchester City.

Tottenham are priced at 19/10 to win the match by SkyBet and turn their torrid form pre-lockdown around. Jose Mourinho’s side will want to return in style as they currently sit eighth, four points behind United in fifth. Defence has caused the most issues for Spurs, as they have conceded 40 goals from 29 matches – the most in the top half.

In attack, they will look to star striker Harry Kane to make the difference as he currently has eleven goals this term. He is priced at 13/8 to score anytime.

Manchester United are priced at 7/5 to win the match and continue from how they left off with a string of impressive results. Ole Gunnar Solskjaer’s side are all fighting fit as all of their stars have returned from injury during lockdown. Paul Pogba and Marcus Rashford are both ready for action, to allow the United boss to field a full-strength squad.

Going forward, Bruno Fernandes has been in inspired form this season and is priced at 11/1 to score outside the area.

Last time these two met, a Marcus Rashford brace cancelled out Dele Alli’s goal at Old Trafford as Solskjaer got a one-up on former Red Devils boss Mourinho. Only one card was shown in the whole match. However, players are returning rather rusty with a lot riding on the result. SkyBet are offering 11/8 for 60+ booking points.

Tottenham vs Manchester United will be televised on Sky Sports Premier League HD and kicks off at 20:15.

– It’s tough to split these two sides, who will not be at full match fitness just yet.