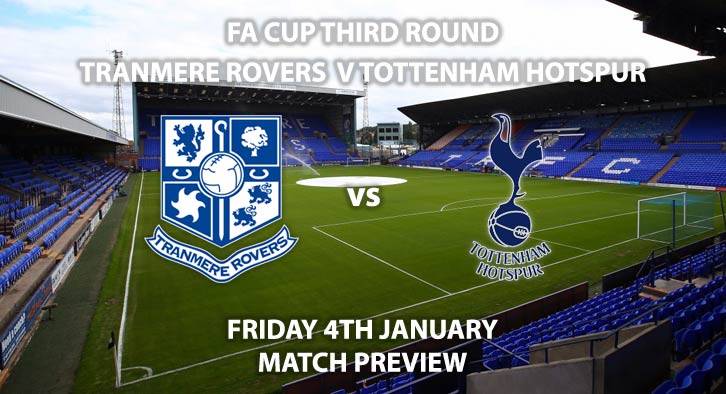 Tranmere vs Tottenham: Tottenham take on League Two outfit Tranmere as they look to avoid any potential FA Cup upset at Prenton Park. Spurs bounced back from their shock 3-1 defeat to Wolves with a confident 3-0 win over Cardiff on Tuesday.

Mauricio Pochettino’s side were three goals ahead by the interval, thanks to potent finishing from Harry Kane, Christian Eriksen and Son Heung-Min. Tottenham will be without Son’s service as he jets off to compete in the Asian Cup with South Korea.

It’s a big week for Tottenham, who face Tranmere, Chelsea and Manchester United in the space of nine days. It’s a run of fixtures that could help shape their season, particularly the first leg of their Carabao Cup semi-final with Chelsea. They’ve won seven of their last nine outings in all competitions so come into this fixture in fine form.

Whilst it’s likely that Pochettino will make some changes to his first-choice starting 11, he will want to ensure they avoid an early exit. Tranmere have enjoyed a positive start to life back in the Football League. They sit ninth in the League two, three points outside the play-offs. They come into this game unbeaten in their last three.

Tranmere defeated Southport in the last round of the competition to reach this stage and will be hoping to give a good account for themselves infront of their own fans. James Norwood is their danger man, the striker has 18 goals already this season, averaging a goal every 145 minutes. If they can supply him with service, they may be able to pull off a shock result.

Andre Marriner is the referee for this fixture. The Englishman has officiated 13 top-flight matches this season. In that time, he has accumulated an average booking points total of 32.3.

Therefore, I would advise a maximum of 50+ total points for this fixture. Tottenham will make some changes to their side for this game but they shouldn’t struggle against League Two opponents. It should be a good chance for some to get some game time and secure a spot in the fourth round in the process.

Tranmere Rovers vs Tottenham Hotspur will be televised live in the UK on BT Sport 2 with kick-off at 19:45.