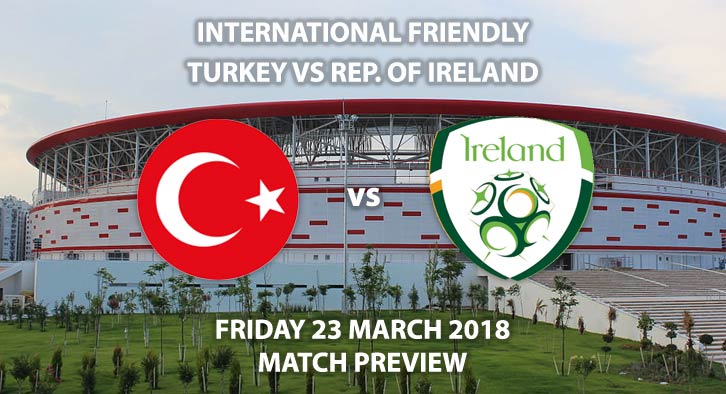 Ireland’s side heroic victory over Wales in Cardiff propelled them into the World Cup play-offs. However, that ended in dismay after a Christian Eriksen-inspired Denmark dismantled Martin O’Neill’s side 5-1 in the crucial match.

O’Neill kept his job, and the planning for the 2020 European Championships has begun. With just 37 international goals in the entire squad for this match (17 coming just from Shane Long), the future is very much at the forefront here. Especially considering call-ups for players like West Ham’s Declan Rice and Aston Villa’s Scott Hogan.

Turkey had a World Cup qualifying campaign to forget, finishing fourth in Group I behind Iceland, Croatia and Ukraine. They have also lost their last two friendlies 2-0 to Romania and perhaps more worrying 3-2 at home to Albania.

Now under the leadership of Shakhtar Donestsk legend Mircea Lucescu a change in fortunes will be expected. Quality players such as Borussia Dortmund’s Omer Toprak and AC Milan’s Hakan Calhanoglu can lead the way to doing so.

With just seven places in the FIFA World Rankings separating these two teams (Ireland 31st, Turkey 38th) a close game should be in store. O’Neill has The Green Army renowned for their solidity, whilst Turkey usually play a more expansive game. This clash of styles could lead to a very interesting exchange. A moment of magic from a player like Calhanoglu or Celta Vigo’s on-loan wonderkid Emre Mor could make the difference.

Slavko Vincic will be the man in charge for this one. The Slovenian officiates in his native country but has also refereed in European competition this season. In eight Prva Liga games he has given 38 yellows cards, one red and two penalties. In the four Champions League and Europa League matches at the helm, he has dished out 19 yellow cards. Vincic’s average cards per game is therefore a very high 4.75. Those European matches include Tottenham Hotspur’s 3-0 victory against Apoel Nicosa and Borussia Dortmund’s 2-1 defeat to RB Salzburg.

With Turkey finding their feet under Lucescu, Ireland should have enough stability to resist Turkey’s attacking forces. Typically, it would be somewhat surprising if they found enough of their own to secure the win.