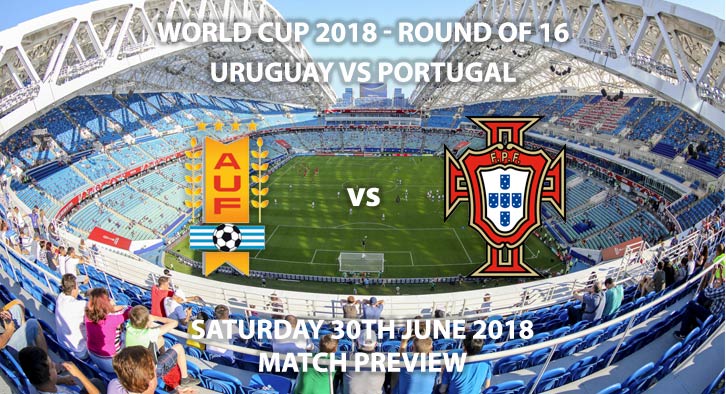 Uruguay vs Portugal – Cristiano Ronaldo will be hoping to add to his four World Cup goals as European Champions Portugal face Uruguay in the round of 16.

Ronaldo occupies second place in the race for the golden boot. The Real Madrid forward is level with Romelu Lukaku on four – both one goal behind Harry Kane. Portugal finished second in Group A, despite finishing level on points with Spain. Their 1-1 draw with Iran in their final group game was littered with controversy. First, Ronaldo missed a penalty, before Iran scored one of their own in the 93rd minute, which was harshly awarded for a handball by Cedric Soares. Iran then had a late chance to win the game and send themselves through to the knockout rounds instead of Portugal.

dThis highlighted the fact that, despite being in a position of control, Portugal nearly threw away their World Cup status in a matter of minutes. Like Argentina, they aren’t a fantastic overall side. They do have Ronaldo, though, who is a match winner on his own. They have the ability to go toe to toe with the best, as they showed against Spain, but they can also lose against anyone.

Uruguay, by contrast, are yet to concede at the World Cup. Three clean sheets and three wins in three games; an unmatched record. Luis Suarez appears to have blown off his early-tournament cobwebs after picking up his second goal in two games against Russia. Edison Cavani also broke his duck for the competition, as they produced a much more fluid performance in a new formation. The 3-5-2 system offered Uruguay much better balance in midfield, whilst also allowing Cavani and Suarez to play up front together. Arsenal target Lucas Torreira and Juventus’ Rodrigo Bentacur looked assured in midfield, whilst width was provided by both wing-backs. With Deigo Godin in defence, there is no surprise they are yet to concede. It may take one of the world’s best to find a way past the Uruguay rearguard.

Cesar Arturo Ramos is the referee for Brazil’s opening game. The Mexican is making his World Cup debut on Sunday. In 29 international matches he has averaged 2.71 yellow cards and 0.1 reds, awarding 0.14 penalties per game along the way. Therefore, I would recommend a maximum of 30+ booking points for any bets.

This is a tough game to call, as both sides have offered contrasting performances during this tournament. Against Spain, Portugal were fantastic. The same for Uruguay, against Russia. In the other games, both sides offered little, which as a result makes this tough to call. I think this one could be a draw, with extra time or penalties needed to separate them.

Uruguay vs Portugal will be televised live in the UK on ITV 1 with kick off at 19:00 GMT.