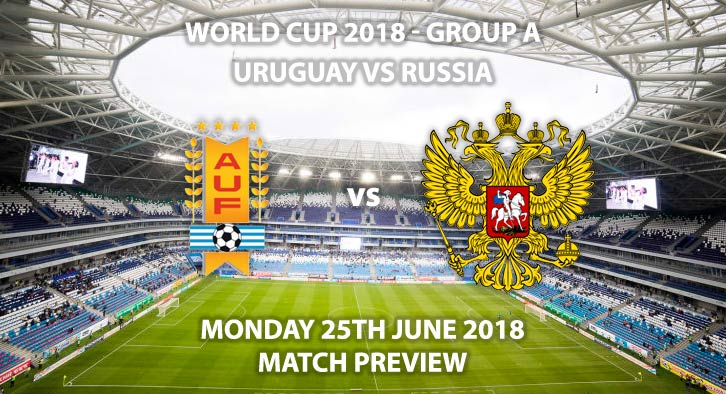 Uruguay vs Russia – with both sides safely into the round of 16, Uruguay face Russia in a battle for top spot in Group A.

Russia sealed their place in the knockout rounds with an emphatic 3-1 win over Egypt. The hosts sprung into life after a lifeless first half, with three goals in 17 minutes. Denis Cheryshev took his tally to four for the tournament, before 6ft 4inch striker Artem Dzyuba sealed three minutes later with his second in two games. With the whole nation behind them, Russia are a team few will fancy in the next round. Alexandar Golovin has been the star of their tournament so far. The 22-year-old playmaker showcased his talents with a stunning free-kick against Arsenal in the Europa League and his displays at this tournament will have only increased interest from potential suitors. With eight goals in two games, Russia have eased any fears that they lack goals in the side. With that in mind, I’d expect this to be an open, attacking game.

Uruguay grabbed their second win in as many games with a 1-0 win over Saudi Arabia. After a poor performance against Egypt, Luis Suarez opened his account for the tournament. The Barcelona man looked back to his usual best as he led his country to victory. In the first two games, Uruguay have proved they are not fantastic entertainers. They resemble Diego Simeone’s Atletico Madrid side, with Diego Godin an integral part of their rock-solid defence. They rely on Suarez and Edison Cavani to get them over the line; few sides can boast a more talented attacking duo. They may not be the prettiest on the eye, but they are an efficient, well-oiled machine.

Malang Diedhiou is the referee for this game. The Senegalese official has averaged 2.08 yellow and 0.15 red cards across 53 international games. Therefore, I would advise a maximum booking points total of 30.

Before this tournament, the gap appeared to be a lot greater between these two sides. It’s fair to say Russia have impressed the most of the two sides, but they do lack the world-class players that Uruguay have. As a result, I think Uruguay will win this one, albeit by the tightest of margins.

Uruguay vs Russia will be televised live in the UK on ITV 1 with kick-off at 15:00 GMT.