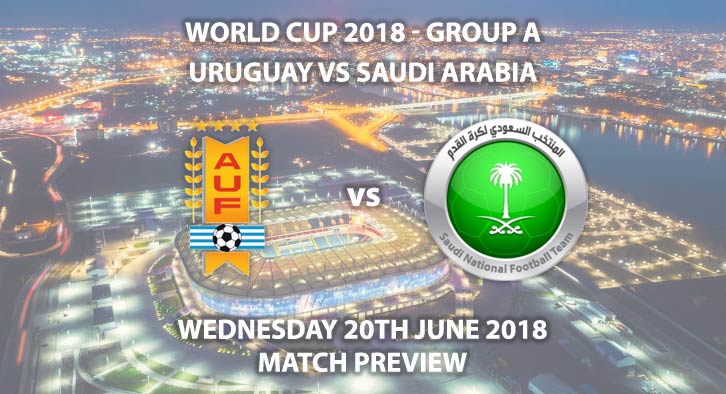 Uruguay vs Saudi Arabia – Uruguay can secure their passage into the last 16 with victory against a deflated Saudi Arabia.

Against Egypt, Uruguay were true to form. They weren’t entirely convincing but had enough quality to get the job done, winning 1-0. Luis Suarez’s poor finishing required Jose Gimenez to step up and head a late, heart-breaking winner.

Gimenez has scored headers in each of his last two games, doing so again is a boosted 12/1 with SkyBet. Additionally, Suarez is the type of player who will be innately hungry to put his last performance right. The Barcelona striker to score first (in what will be his 100th cap) and Uruguay to win is 9/4 with bet365.

Gimenez’s Atletico Madrid partner Diego Godin was undoubtedly the best player on the pitch. Edison Cavani showed some nice touches. However, in general there was a lack of fluidity in the side. Players like Giorgian de Arrascaeta and Juventus’ Rodrigo Bentacur really failed to impress. This could leave the door open for Arsenal-bound Lucas Torreira to get the nod in midfield.

2010 semi-finalists, La Celeste are seen by many as dark horses for this World Cup. With two of the planet’s best strikers and central defenders however, there isn’t much dark about it. Uruguay will expect to comfortably win this group and mount a serious challenge in what could be Cavani, Suarez and Godin’s last chance at a World Cup.

Oscar Tabarez’s team will be raring to put any critics to rest, by winning and guaranteeing qualification from the group. Albeit, against what seems to be a woeful Saudi Arabia side. The Green Falcons were dismantled 5-0 by the hosts in the opening match, to many fans’ surprise. The inability to deal with what has been labelled the worst Russian team in decades was damning.

Saudi lacked creativity and defensive organisation, the subsequent lack of concentration cost them dearly. This could be down to the disruption of having the managers in three months when new coach in Juan Antonio Pizzi was appointed. As ex-Chile coach Pizzi has been in his role since November of 2017 that excuse would be futile. A win is an absolute necessity should Saudi want to qualify, but really anything they get will be a bonus.

Pizzi’s men will find it hard against a brilliantly organised Uruguayan defence and especially with the constant threat of world-class talent up the other end to worry about. Uruguay have won with clean sheets in 13 of the previous 17, winning 5 of the last 13, 3-0. Saudi Arabia winning their first match at the World Cup for 24 years seems unlikely at best.