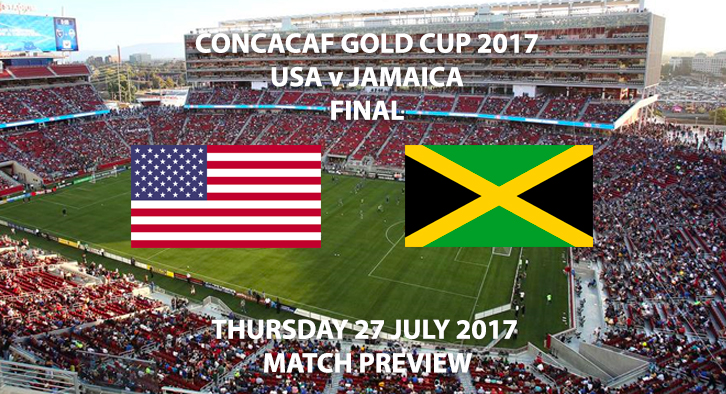 USA vs Jamaica – Match Preview – International tournaments are a rare occurrence. They are the pinnacle of a professional footballer’s career, an opportunity for a player to showcase their abilities on the grandest audiences. Normally to legions of patriotic fans who look on either from the crowd or from a distance, watching their heroes attempt to cement their place in history.

USMNT and surprise package Jamaica will both compete at Levis Stadium, Santa Clara on Thursday morning in the CONCACAF Gold Cup Final to do just that.

The Yanks may not hold this competition in the highest regard compared to the World Cup for instance, hence the initial squad excluding a lot of big names like Jozy Altidore and Clint Dempsey and including younger, more inexperienced players, but make no mistake Bruce Arena’s team definitely want to win this tournament.

The stars switched back into the side at the quarter-final stage, and Clint Dempsey did what he does best to seal Sunday’s 2-0 semi-final victory over Costa Rica with a goal that ties him as the country’s all-time leading goal-scorer with Landon Donovan on 57 strikes.

A quarter-final triumph over El Salvador by the same score-line demonstrates that in a tournament where there has been no single outstanding team, the United States are garnering momentum at the just the right time and are demonstrating championship credentials.

Mexico suffered the ignominy of defeat against Jamaica in the semi-finals, and the United States will do everything in their power to avoid facing the same fate.
The Stars and Stripes are the second most successful side in Gold Cup history with 5 victories, two behind bitter rivals Mexico, and this presents a fantastic opportunity to narrow the gap to a singular title. Not to mention the reward for victory is a guaranteed place in the CONCACAF play-off for the 2021 Confederations Cup.

Kemar Lawrence scored a last minute stunner for Jamaica to progress to the Final Photo Credit:concacaf.com

Jamaica will be inherently aware of that opportunity, by beating Curacao, Canada and Mexico on the way, they have the chance to elevate their underdog story to the highest reaches of the game by beating a CONCACAF superpower like the United States in an international tournament final.
Creating a chance to play against the World’s best at the Confederations Cup is something manager Theodore Whitmore will be desperate to achieve.

This is the second successive final for the Reggae Boyz which is an outstanding achievement, this two-year period has undoubtedly been the greatest in Jamaican history.
Exacting revenge against 2015 winners Mexico in Monday’s semi-final with a resilient 1-0 win illustrates how far they have come. To do so with a wonderful moment of individual brilliance like the free-kick Kemar Lawrence curled into the top corner in the 88th minute makes it so much sweeter.

This final should have an intriguing clash of styles, the Reggae Boyz have only conceded two goals in the entire tournament and will set up to force the United States, who like to attack and are the tournament’s highest scorers with a total of 11 goals so far, to dominate possession and break them down.

The United States are unquestionably massive favourites to claim their sixth CONCACAF Gold Cup crown but do not rule Jamaica out one bit – they have already conquered Mexico and have glory in their sights. 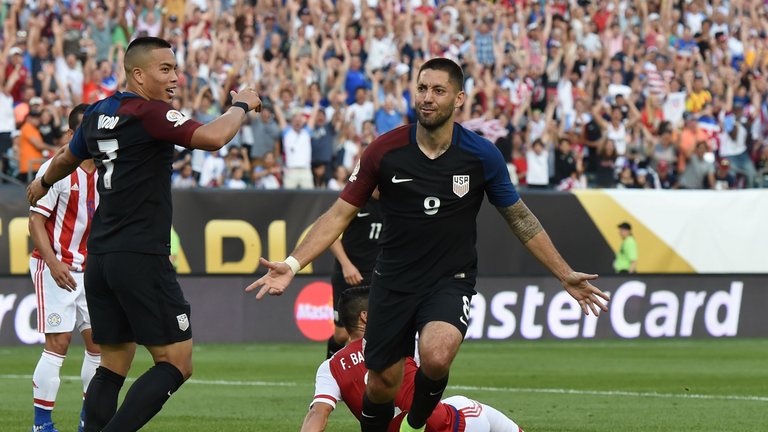 Clint Dempsey could become USA’s all time top goalscorer with a goal in the CONCACAF Final Photo Credit: skysports.com

Player to Watch
Clint Dempsey is an USMNT legend, nothing will ever change that. However, he has an opportunity to enhance that legacy on Thursday by scoring the goal that will place him as his country’s record goal-scorer and with a penchant for finding the net when it matters, you wouldn’t bet against him doing it. The ex-New England Revolution, Fulham, Spurs and Seattle Sounders forward is seeking his third CONCACAF Gold Cup against the team who he began his international career against, with a debut v Jamaica 13 years ago in 2004. He has since made a total of 136 appearances for the United States and it would be a special moment for all involved to see him score the winner.