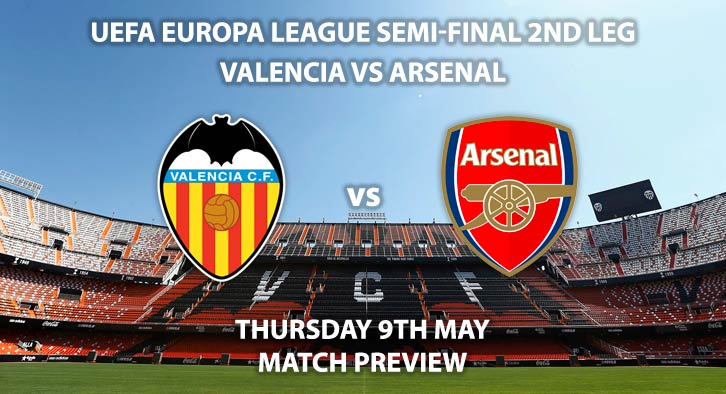 Valencia vs Arsenal: Arsenal will be hoping to boost their hopes of competing in next season’s Champions League by reaching the Europa League final with victory over Valencia on Thursday night.

The Gunners hold a 3-1 lead heading into the second leg of this tie, having beaten their Spanish counterparts at the Emirates last week. A brace from Alexandre Lacazette and a late Pierre-Emerick Aubameyang strike saw Unai Emery’s side come from behind. Arsenal have lost their last two away games convincingly and have struggled on the road all season. In their knockout Europa League matches, they have only beaten Napoli, having lost to BATE Borisov and Rennes in the previous rounds. Throw in three-goal defeats against Wolves and Leicester City and it’s easy to see why some supporters are feeling nervy ahead of this game. Arsenal’s disappointing 1-1 draw with Brighton at the weekend has ended their hopes of qualifying for the Champions League through the top four. With one game to play, they are three points behind Tottenham but have an inferior goal difference of eight.

Valencia warmed up for their second-leg clash with a 6-2 win over bottom club Huesca. That win kept their faint hopes of securing Champions League football alive. They sit fifth in the La Liga table, three points behind Getafe who occupy the final top four. If they fail to secure qualification through the league, their only hope of entering Europe’s elite competition lie through the Europa League. Marcelino Toral’s side haven’t been at their best in the Mestalla this season. They have the tenth best home form in La Liga, despite only losing twice in 18 matches. Draws have been their downfall, with ten, whilst their away form is the fourth best.

Danny Makkelie is the referee for this fixture. The Dutchman has officiated 29 matches this season. In that time, he has accumulated a total of 2.44 cards per game. Therefore, I would advise a maximum of 50+ total booking points for this fixture.

Arsenal’s poor form away from home has cost them a place in the top four through the Premier League but in Europe, they have been more convincing. Valencia’s results at home haven’t been the best either. Therefore I’m going to back the Gunners to grind their way through.

Valencia vs Arsenal will be televised live in the UK on BT Sport 2 with kick off at 20:00 GMT.