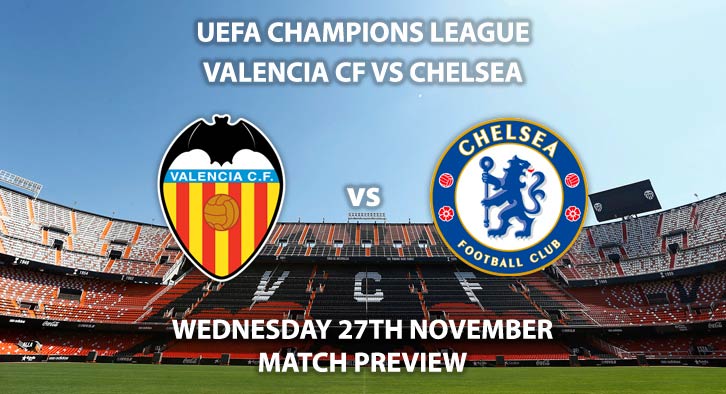 Chelsea will travel to Spain to face Valencia on Wednesday night in UEFA Champions League action.

It is still all to play for in Group H with both these sides and Ajax on seven points heading into the final two matches. They also boast incredibly similar records with the London-based club scoring just one more goal than their Spanish opposition but have conceded one more – meaning they share the same goal difference.

In the reverse of this fixture at Stamford Bridge, Valencia battled out a narrow 1-0 victory.

Valencia are priced at 23/10 by SkyBet to win this crunch group match. The Spanish side are underdogs in this group but will not go out without a fight. In their last group match, at home to Lille, they netted four goals in a convincing 4-1 victory. Striker Maxi Gomez is fit for this tie and will be a possible headache for the visitors. The Uruguayan has six goals from 13 matches this season in all competitions and is 2/1 to score anytime.

Chelsea are priced at 21/20 to win the match and continue to improve under Frank Lampard’s guidance. The Blues lost on the weekend to Premier League champions Manchester City but performed well and came out the match with their heads held high. For a young side they have shown strong character and desire – which was illustrated when they beat last season’s semi-finalists, Ajax, 1-0 on the road.

Going forward, Tammy Abraham has been a revelation at the spearhead of the attack and will be relied upon on Wednesday. He is priced at 21/20 to score anytime.

The referee for this match will be German Felix Zwayer. In their last meeting, only 30 booking points were brandished but more is at stake this time around. SkyBet are offering 11/10 for 60+ booking points.

The match will be televised on BT Sport 3 HD and kicks off at the earlier time of 17:55.

– The visitors made a good account of themselves against Man City on the weekend and are showcasing good character for a young side.