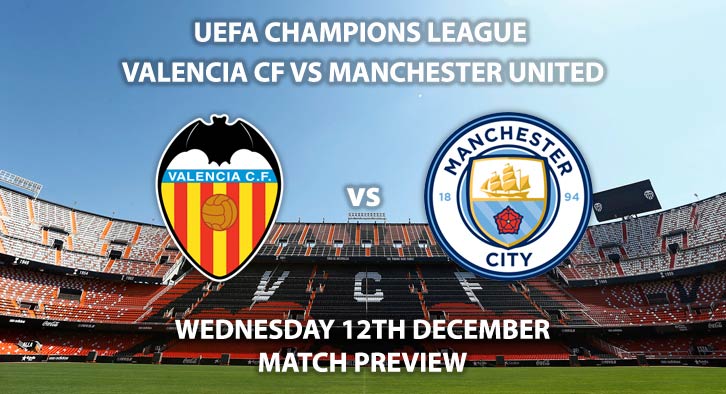 In theory, this match has very little riding on it for the hosts, who are already too far behind their opponents to qualify for the knockout stages. There is still a possible top spot place for the visitors, who trail 2 points behind Juventus in 1stplace in Group H. Jose Mourinho’s side will need three points and for Juventus to lose to Young Boys.

Valencia are priced at 7/5 by SkyBet to win in front of a home crowd. Their home record in recent times in the competition does not make for pretty reading with two wins from their last seven matches. However, they do boast a better record against Premier League opposition. They have won 8 of their last 17 bouts with Premier League sides. ‘Los Murcielagos’ have a wealth of attacking strength with Michy Batshuayi, Kevin Gamiero, Santi Mina and Rodrigo. Gamiero and Mina are 2/1 to score anytime whilst Rodrigo is 13/8 to do the same.

Despite being drawn in a tough group, Valencia’s defence has not crumbled under mass ampounts of pressure. They have conceded 5 goals in their 5 games. For Valencia to win and both teams to score, SkyBet are offering 7/2.

Manchester United are priced at 15/8. The visitors have done enough to qualify for the knockout stages and still have the chance to finish top, although unlikely. In the reverse of this fixture, they failed to score in front of a home crowd. Their strike force has come under a lot of fire recently, with Mourinho switching things up. Paul Pogba is currently their highest goalscorer in the competition with 2 goals and 1 assist. He is 5/2 to score anytime. Anthony Martial has been the most positive influence in recent weeks and is 2/1 to score anytime.

Defensively, United have been incredibly rigid and firm. They have conceded just two goals in five matches and kept Valencia silent when they visited Old Trafford. The visitors are priced at 4/1 to win to nil.

The referee for this match will be Georgi Kabakov.

– With the only team playing for something, it’s hard to see United not leaving with three points.

Odds and markets last updated on Wednesday 12th December 2018 @00:34 GMT. Keep checking back to see if there’s any updates to markets – the time stamp in the previous sentence for when we update tips on this page will be updated.