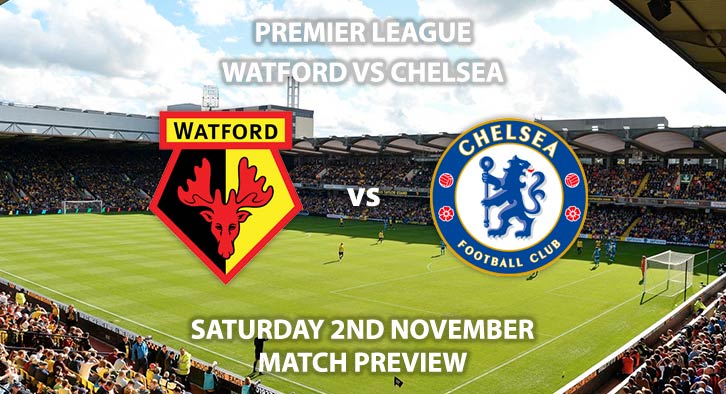 Watford return to Premier League action this weekend as they welcome Chelsea to Vicarage Road on Saturday evening.

The Hornets are still the only side in the division yet to taste a league victory this season, and many are predicting that to still be the case following this weekends clash. Watford are currently rock bottom of the league with five points; three of them points coming in their last three outings, a draw in each. Last weekend’s 0-0 draw at home to Bournemouth was their tenth Premier league match without a win.

The visitors Chelsea will be looking to return to winning ways themselves, following their midweek exit of the Carabao Cup at the hands of Manchester United. Marcus Rashford’s stunning 2nd half free kick proved to be the difference, as united ran out 2-1 winners.

Frank Lampard’s side will be eager to return to Premier League action and extend their impressive away run. Chelsea have won their last four consecutive away matches, which has shot them up the table to 4th, level on points with 3rd placed Leicester. Chelsea’s last league defeat was back in September, losing 2-1 to Liverpool at Stamford Bridge.

Last weekends 4-2 win over Burnley was their latest away triumph, with new boy Christian Pulisic grabbing a hat-trick, his first goals in Chelsea colours. His hat-trick put him in the history bucks as he first American to score a Premier League hat-trick since Clint Dempsey, back in his Fulham days.

Furthermore, in Chelsea’s four consecutive away wins, they’ve netted 16 times demonstrating they’re no strangers to finding the back of the net away from Stamford Bridge.

Chelsea will be licking their lips at the prospect of facing Watford, and will be hoping their phenomenal record against the Hornets continues. Chelsea completed a league double over their opponents last season (3-0 H, 2-1 A) and have lost once in their last sixteen affairs with Watford.

Watford’s most recent win came in February 2018 where they ran out 4-1 winners at Vicarage road, and you’ll have to rewind all the way back to 1999 for their last league win, a truly wretched record.

The referee for his weekends encounter is Anthony Taylor. The 41-year old has overseen nine Premier League encounters this season, accumulating a total of thirty-seven yellow cards and one red. This considered, I would recommend a minimum of 20+ booking points for this fixture. Taylor has taken charge of both sides this season; Chelsea’s opening day defeat to Manchester United where he awarded seven yellow cards, and Watford’s 2-2 draw with Arsenal, where six yellow cards were brandished.

Watford vs Chelsea will be broadcast live on Sky Sports Premier League with kick-off scheduled to take place at 17:30 BST on Saturday.