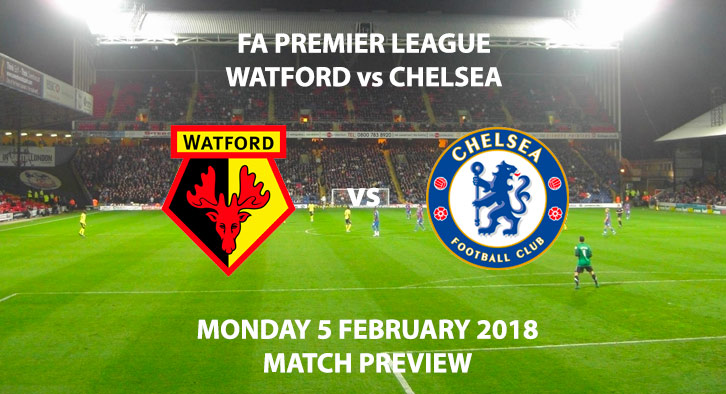 FA Premier League: Watford vs Chelsea. Chelsea take a trip across London to Vicarage Road as they face Watford as they look to consolidate their top four place.

New signing Oliver Giroud could be in line to make his debut following his 15.3 million pound move from Arsenal. Despite being 31, the Frenchman represents fine value for money in an extremely bloated market. After five years in the division, Giroud brings guaranteed Premier League goals, unlike a number of their other reported targets. He offers support and is a good back-up to Alvaro Morata; his presence within the squad may even raise the game of the Spaniard.

There’s no doubt that if he is given game time he is capable of scoring 15 league goals. I’ve always felt he’s a fantastic second striker, but not quite good enough to fire you to a league title. With Morata in close tandem, they could be key as Chelsea look to regain their title next season.

After a shock home defeat to Bournemouth in midweek, it’s imperative the Champions get back on track or risk getting further embroiled in a heated top four scrap. After a run of just one win in 14 games, Watford sacked Marco Silva. His replacement, Javi Garcia, got off to a losing start last weekend as they went out of the FA Cup at the hands of Southampton. After such an impressive start to the campaign, their recent slump has seen them drop to 11th, three points above the relegation zone.

The January window saw Gerard Deulofeu return to England with the Spanish winger signing on a season-long loan from Barcelona. The former Everton winger’s pace and trickery could be the catalyst to reignite the Hornets stuttering form. With crucial fixture’s against relegation rivals West Ham and West Brom to come later in the month, building momentum for those game is vital to their hopes of staying up.

Chelsea are unbeaten in their last 13 games against Watford, winning ten of those meetings. Their last defeat came at Vicarage Road back in 1999, almost 20 years ago. Craig Pawson is the referee for Monday night’s match, fresh from officiating West Brom’s 3-2 FA Cup win over Liverpool. Pawson has the highest average booking points total in the division, averaging 42.9 per game. He also averaged a grand total of 3.7 yellow cards per match, which means booking points may be a good bet.

With the impetus of a new manager, I could see Watford taking something from this game. After their defeat to Bournemouth, Chelsea have proved they’re vulnerable and an early goal for Watford could further dent the Champions low confidence.