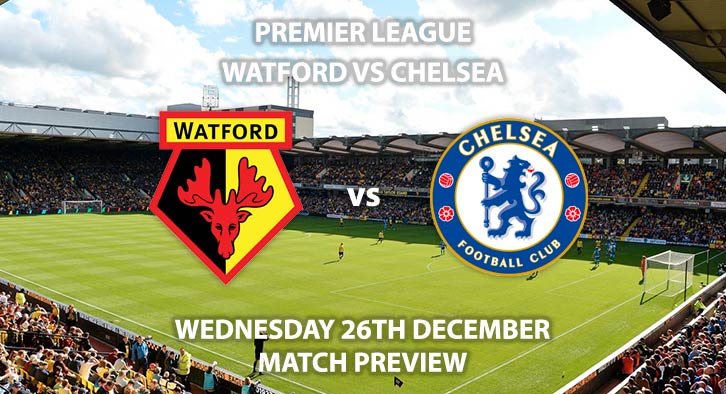 Watford vs Chelsea: Chelsea head to Watford on boxing day, desperate to atone for their shock 1-0 defeat to Leicester four days ago.

Maurizio Sarri’s men were left frustrated after going down 1-0 to the Foxes thanks to Jamie Vardy’s second-half strike. That defeat leaves them 11 points behind the league leaders Liverpool and five behind third-placed Tottenham. Arsenal’s win over Burnley also means the Gunners are level on points with their London rivals heading into the festive period. That cranks up the pressure on Sarri, to ensure they end the season in the top four. Chelsea have mad memories of Vicarage Road after getting thumped 4-1 by the Hornets here last year under Antonio Conte. Chelsea’s goalscoring issues look set to underpin their campaign. The Blues have scored two goals or less in each of their last seven games. Since Diego Costa left, they have lacked a world-class striker. It seems only a matter of time before Sarri strengthens their attacking options, which could spell the end of Alvaro Morata.

Watford continued their recent resurgence with three points at West Ham. Goals from Gerard Deulofeu and Troy Deeney did the damage at the Olympic Stadium to ensure back-to-back wins. Deulofeu has been in fine form lately, in a new role. The Spanish winger has been deployed in the ‘number ten’ role of late, which has seen him find the net in his last two outings. The 24-year-old has always had potential – highlighted by two spells at Barcelona – but he may be finally showcasing his talent on a more consistent basis.

Martin Atkinson is the referee for this game. The Englishman has taken charge of 14 matches this season. In that time, he has accumulated an average booking points total of 33.9. As a result, I would recommend a maximum of 50+ points for this game.

Chelsea must return to winning ways to ensure they don’t miss out on Champions League football once again. Watford have shown they are capable of taking points from the big boys after beating Tottenham earlier in the season. This one will be tight but I fancy Chelsea to just about nick all three points.

Watford vs Chelsea will be televised live in the UK on Sky Sports Premier League with kick-off at 19:30 GMT.