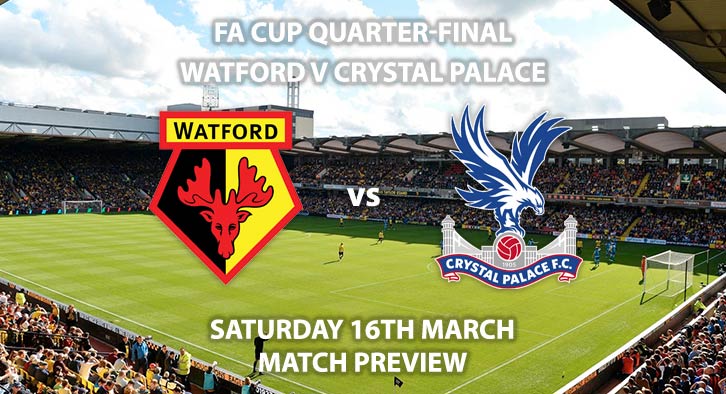 Watford vs Crystal Palace: Watford host Crystal Palace in all-Premier League affair as both sides look to secure a place in the last four of the FA Cup.

The Hornets come into this game in fantastic form, despite a 3-1 reverse at Manchester City last weekend. Raheem Sterling’s controversial opener was then followed up with another double to complete a hat-trick. Watford boss Javi Gracia made the controversial decision to make seven changes for that game, with this fixture in mind. So often we see managers making wholesale changes in the FA Cup, it was refreshing to see a mid-table manager do things the other way around. Watford have little more to play for in the league, so focusing on this competition makes perfect sense. With a day at Wembley up for grabs, this is a huge chance for them to some history for their fans. They’re unbeaten in four games at Vicarage Road and were victorious the last time these two met in January – a 2-1 win at Selhurst Park.

Palace have been suffering from a lack of consistency in recent weeks. After beating Burnley impressively a fortnight ago, the Eagles were then outed 2-1 by their close rivals Brighton and Hove Albion. Palace have been a much stronger side on their travels recently, which bodes well for this clash. They are unbeaten in their last four away games, winning three of those. Michy Batshuayi is now coming into the fore after finding his feet at his new club. The Belgian frontman has two goals in his last four games. It’s five league games without a clean sheet for Palace, however, which may be a concern for Roy Hodgson. Similarly, Watford are four without a shut out, which should make for an open, exciting spectacle. Palace reached the FA Cup final in 2016 and their fans would love another opportunity to make it to Wembley.

Kevin Friend is the referee for this fixture. The Englishman has officiated 33 top-flight matches this season. In that time, he has accumulated an average booking points total of 38.9. Therefore, I would advise a maximum of 50+ total points for this fixture.

Both of these will sense this a real opportunity to reach Wembley, with most of the big guns out of the competition. Watford’s form, particularly at home, has been great recently. As a result, they are my tip to reach the last four.

Watford vs Crystal Palace will be televised live in the UK on BT Sport 1 with kick-off at 12:15 GMT.

Odds and markets last updated on Saturday 16th March 2019 @11:07 GMT. Keep checking back to see if there’s any updates to markets – the time stamp in the previous sentence for when we update tips on this page will be updated.