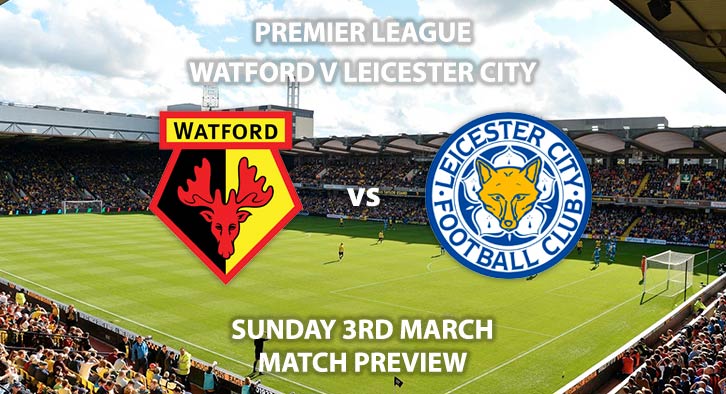 Watford and Leicester City will go toe to toe in Premier League action this weekend.

The home side will want to wipe the egg off their face after getting a 5-0 pasting from Liverpool midweek. Meanwhile, Leicester finally undone their torrid form with a 2-1 victory over Brighton on the same day they announced Brendan Rodgers as their manager.

The bookmakers are struggling to call this match, with Watford priced at 7/5 to win by SkyBet. Watford had a torrid time in their last outing against Liverpool. However, before they met the league leaders, they had won three straight matches in the bounce. In recent weeks, tricky winger Gerard Deulofeu has stolen the headlines. The Spaniard grabbed a tidy hat-trick against Cardiff and is price boosted to 8/1 to score first.

The last two meeting between these two have seen the Foxes win by a 2-0 score line. But the last time they played at Vicarage Road, Watford won 2-1. That score line is price boosted by SkyBet to 10/1 to happen again.

Leicester City are priced at 19/10 to win – a tempting price given the predicted manager bounce at the club right now. With a new man at the helm, things look exciting for Leicester and their last outing against Brighton saw front man Jamie Vardy bag a crucial goal that proved the winner. With Rodgers exciting style of attacking football, many are predicting Vardy will continue to increase his goal tally – that already sits at 9 for the season. He is 5/1 to score first.

The referee for this match will be John Moss. The official has been rather fair in his officiating this season in the Premier League and has averaged 38.9 booking points so far.

Watford vs Leicester City will be televised on Sky Sports Main Event HD and kicks off at 12:00.

– I expect the away side to be invigorated by their new managers arrival and just clinch this match.

Odds and markets last updated on Friday 1st March @17:15 GMT. Keep checking back to see if there’s any update to markets – the time stamp in the previous sentence for when we update tips on this page will be updated.