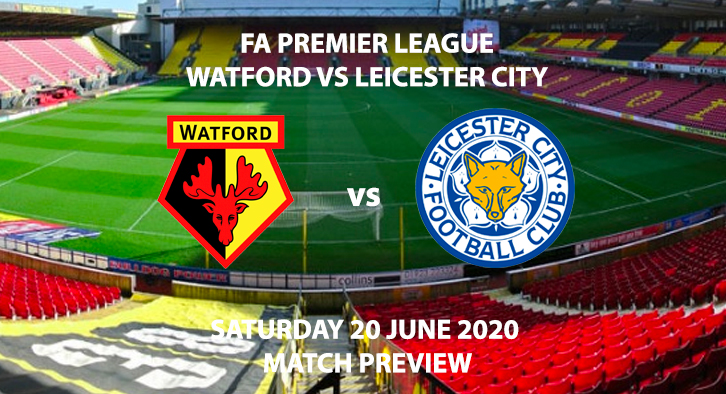 The Premier League returns this weekend and Watford are back in action on Saturday afternoon when they host Leicester City.

Before the league’s stoppage, Watford had lifted themselves out of the relegation zone and up to 17th, with all attention on surviving the dreaded drop. Nigel Pearson’s side had won one of their last eight in all competitions, the 3-0 triumph over runaway leaders Liverpool. Before that, their last win came in January.

Leicester meanwhile were battling at the opposite end of the table and striving to secure Champions League football for next season. With 2nd placed Manchester City currently suspended from competing in the competition next year, the Foxes find themselves on course to secure European football for the second time in the last five seasons. Brendan Rodgers’ side had lost two of their last three in the Premier League before the break. A winning return is exactly what his side will be targeting.

These two sides met back in December where Leicester ran out 2-0 winners thanks to goals from Jamie Vardy and James Maddison. Jamie Vardy has scored in his last four consecutive appearances against the Hornets and is priced at 21/20 to score anytime on SkyBet.

Craig Pawson is in charge for this one and the 41-year-old has awarded 63 yellow cards in 15 Premier League appearances this season, an average of over four cards per game.

Watford’s Abdoulaye Doucoure has been yellow carded in his last two appearances in this fixture and is the Hornet’s most booked player this season. The Frenchman is priced at 5/2 to be carded in 90 minutes on SkyBet.

Watford vs Leicester City will be televised live in the UK on BT Sport 1.