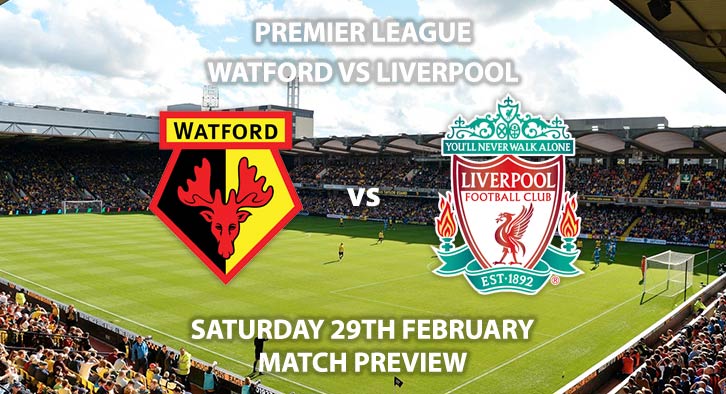 Watford return to Vicarage road this weekend as they host Liverpool in the Premier League on Saturday evening.

Both sides are competing for different reasons at different ends of the table, and a win for either would send them on their way to achieve their respective goals.

Liverpool need only four more wins from their remaining eleven league matches to be crowned champions – it would be their first league title in thirty years. Watford on the other hand are in the thick of a battle for survival and find themselves 19th in the league, a point from safety.

Liverpool are on course for a record breaking season, and have won twenty-six of their twenty-seven Premier League fixtures. A win on Saturday evening could see Jurgen Klopp’s side break the record for the number of consecutive Premier League wins. The 3-2 win over West Ham on Monday evening took Liverpool level with Manchester City on eighteen consecutive wins.

Watford on the other hand were defeated 3-0 against Manchester United at Old Trafford on Sunday afternoon, their sixth match without a win. The Hornets have hit poor form in recent weeks, which will frustrate manager Nigel Pearson after his bright start in charge. Watford went seven unbeaten in all competitions following his arrival, but have dropped points in recent weeks, which has seen them slump back down the table.

Liverpool won the earlier meeting in the season 2-0 thanks to a brace from Mo Salah. Jurgen Klopp’s side have won seven of the last eight meetings between the two sides. Watford’s last win in this fixture came in December 2015, a 3-0 win at Vicarage road.

The referee for Saturday nights clash is Michael Oliver. The 35-year old has been one of the fairer officials in the league this season, averaging just over three yellow cards in the Premier League this season. I would recommend a minimum of 30+ booking points for this fixture.

Watford vs Liverpool will be televised live in the UK on Sky Sports Premier League HD with kick off at 17:30 GMT.