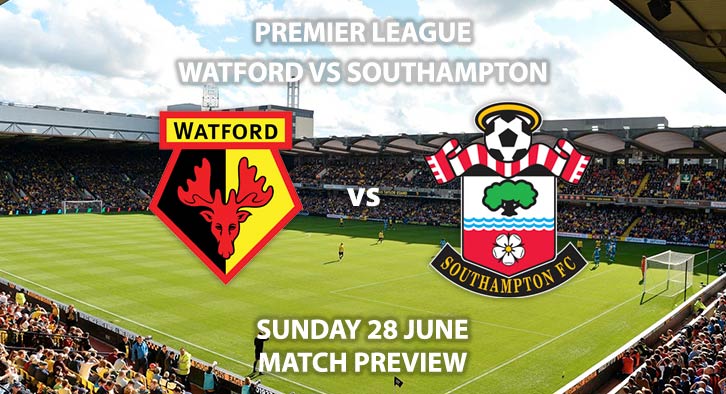 Watford return to Vicarage road when they host Southampton in the Premier League on Sunday afternoon.

Both sides will be eager to get points on the board after failing to do so in their most recent encounter. Watford were beaten 1-0 away to Burnley meanwhile Southampton suffered a 2-0 loss to Arsenal.

Nigel Pearson’s Watford side still have plenty of work to do if they are to avoid relegation this season. The Hornets are a point and two places above the relegation zone and are among a cluster of teams battling for survival. Southampton meanwhile have lost their way in recent weeks with several disappointing results, however their progress made at the turn of the year helped distance themselves from the drop zone.

Watford have won once in their last nine Premier League matches, and only three times in total in the league in 2020. They come into this one priced at 6/4 on SkyBet to claim all three points.

Ralph Hassenhuttl’s Southampton side won 3-0 against Norwich in their last away fixture in the Premier League and are priced at 9/5 on SkyBet to win this one.

These two sides last met in November and Southampton ran out 2-1 winners. Danny Ings netted for Southampton that day, and is their top scorer this season with 16 Premier League goals. Ings is priced at 3/1 to score first this weekend.

The referee for this one is Michael Oliver. The 35-year old has overseen 25 Premier League encounters so far this season, accumulating a total of 78 yellow cards and no red cards. November’s meeting between these two produced only the one yellow card.

Southampton’s Pierre –Emile Hojbjerg has been yellow carded in two of his last four appearances against Watford and is priced at 23/10 to be yellow carded on SkyBet.

This match will be televised live on Sky Sports Main Event/Premier League/Pick TV with kick-off scheduled to take place at 16:30 on Sunday afternoon.