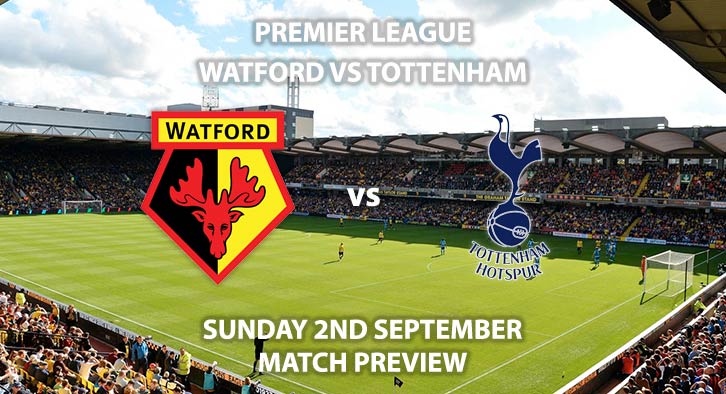 Watford vs Tottenham Hotspur Both sides have got off to perfect starts with three wins from three matches. The hosts recent outing saw them beat Crystal Palace 2-1. Meanwhile, the visitors took apart Manchester United 3-0 with a stellar second half performance.

Watford are currently fourth in the Premier League and have shocked many with their impressive beginning to the season. SkyBet have priced them at a whopping 17/4 to continue their unbeaten form. The whole team have really hit the ground running, but no one more than attacker Roberto Pereyra. The Argentine has already netted three goals and looks a danger with his fast feet and eye for goal from any distance. He’s backed at a tempting 12/1 to break the deadlock this weekend.

They have also only conceded twice in their three matches whilst scoring seven goals. However, they face a tough test against Spurs who have Harry Kane alongside in form Lucas Moura causing them headaches. You’ll get odds of 5/1 for them to keep a clean sheet.

Spurs are currently second in the table and favourites for this encounter. The North Londoners have also achieved maximum points and have done so in style. With eight goals to their name and only two conceded, it’s safe to say they’re having no trouble finding the goal. Both Harry Kane – who broke his August curse – and Lucas Moura were on fine form against Manchester United, with the little Brazilian stealing the show. If you feel both will be on target again, which is a likely prospect, then SkyBet are offering 4/1 to both Kane and Lucas to score.

Defensively, Spurs look difficult to break down for yet another season. Their impressive squad depth and talent alongside Hugo Lloris in goal often means it will take something special to beat them. SkyBet are offering cracking odds of 15/8 for Tottenham to win to nil. Worth backing as it is unlikely Watford will breeze past this side despite their impressive start.

The referee for this match will be Andre Marriner. The official has awarded an average of 25 booking points in his 2 matches so far.

Watford vs Tottenham will be televised on Sky Sports Premier League HD and kicks off at 16:00.

I feel Spurs look like genuine title contenders and will enter the match high on confidence after thrashing Manchester United.

Odds and markets last updated on Sunday 2nd September 2018 @12:50 GMT. Keep checking back to see if there’s any updates to markets – the time stamp in the previous sentence for when we update tips on this page will be updated.