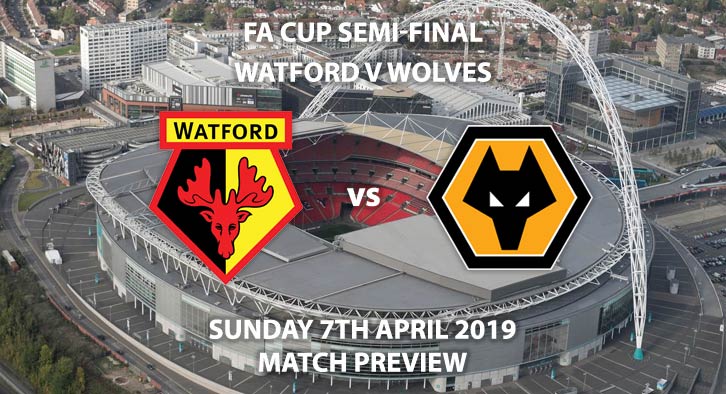 Watford vs Wolves: Two of the Premier League’s ‘best of the rest’ go head to head in the FA Cup semi-final with both sides looking to reach their first cup final this century.

Watford come into this game just one place and point behind Wolves in the Premier League, sat in eighth position. They come into this fixture after condemning Fulham to relegation in midweek with a 4-1 win at Vicarage Road. Abdoulaye Doucoure grabbed the opener in that match, his second goal in as many games. The French powerhouse has been crucial for Watford this season, catching the eye of a number of potential top-four suitors, as well as abroad. Will Hughes and Gerard Deolufeu have also been in fine form lately, Hughes was also on the scoresheet on Tuesday night, thumping in a stunning volley to make the score 2-1. The pitch at Wembley will suit Watford’s style of football massively, as it will Wolves, which should make for a very entertaining cup tie.

Wolves come into this match after yet another famous scalp at Molineux. Nuno Espirito Santo’s side have now taken 13 points from top-six opposition this season, following their 2-1 win over Manchester United. It means that wolves have faced the Red Devils three times this season and haven’t lost, winning twice, once in the last round of this competition. Raul Jiminez and Diogo Jota’s partnership in attack has proved fruitful since their change to a 3-5-2 formation. The ‘little and large’ combo has seen the pair score in five of Wolves’ last seven league fixtures and they should lead the line once again on Sunday.

Michael Oliver is the referee for this fixture. The Englishman has officiated 39 top-flight matches this season. In that time, he has accumulated an average booking points total of 34.4. Therefore, I would advise a maximum of 50+ total points for this fixture.

This game will be a really close call, with both sides very similar in ability and style of play. Both teams will suit the big Wembley pitch and it could go right down to penalties to decide the winner. In full-time, I’m going to go for a draw, but I think Wolves could sneak it in extra-time, or from 12 yards.

Watford vs Wolves will be televised live in the UK on BT Sport 2 with kick off at 16:00 GMT.

Odds and markets last updated on Sunday 7th April 2019 @12:37 GMT. Keep checking back to see if there’s any updates to markets – the time stamp in the previous sentence for when we update tips on this page will be updated.