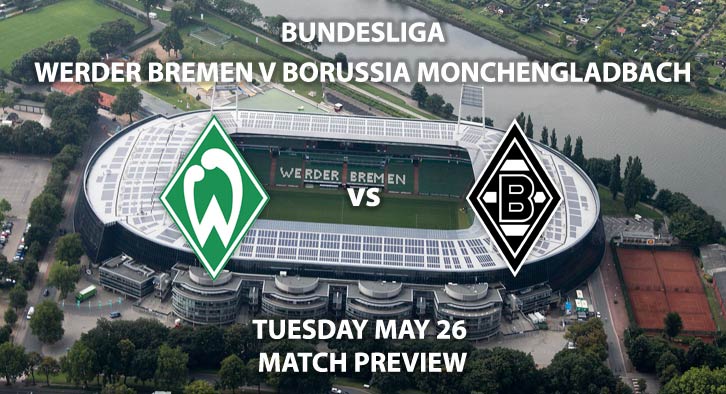 The top of the table clash between Bayern Munich and Borussia Dortmund may take centre-stage on Tuesday evening, but as far as these two sides are concerned there’s still plenty to play for this season, at different ends of the table.

Werder Bremen picked up a much-needed win against Freiburg on Saturday. Leonardo Bittencourt’s first-half winner secured Bremen’s first win since January and only their fifth in total this season.

Borussia Monchengladbach meanwhile suffered a dent to their hopes of securing Champions League football with a 3-1 home defeat to Bayer Leverkusen. Saturday’s defeat was Monchengladbach’s second in their last nine games, and their third home defeat of the season.

Marco Rose’s side were 3-1 winners in the reverse fixture back in November. Monchengladbach boast a tremendous record in this fixture and are unbeaten in over five years against Werder Bremen, winning six of the last eight. BTTS is certainly a market worth exploring for this one. Eight of the last ten meetings, including the last five encounters has seen both teams score. SkyBet are offering odds for BTTS at 1/2, and BTTS with a Monchengladbach win at 21/10.

Marcus Thuram has scored in his last two games for Monchengladbach, and the Frenchman is priced at 13/8 to score anytime on Tuesday night.

Marco Freidl may be worth considering in the booking market for Tuesday night’s game. The Austrian has been booked in his last two consecutive Bundesliga appearances. Meanwhile Monchengladbach have racked up nine yellow cards in their last four Bundesliga matches, so team booking points may also be a market worth exploring.

Monchengladbach have won three of their last four games on the road and seem good value at 5/6 to pick up all three points on Tuesday evening.

Werder Bremen vs Borussia Monchengladbach will be televised live in the UK on BT Sport 1 with kick-off 19:30 BST.