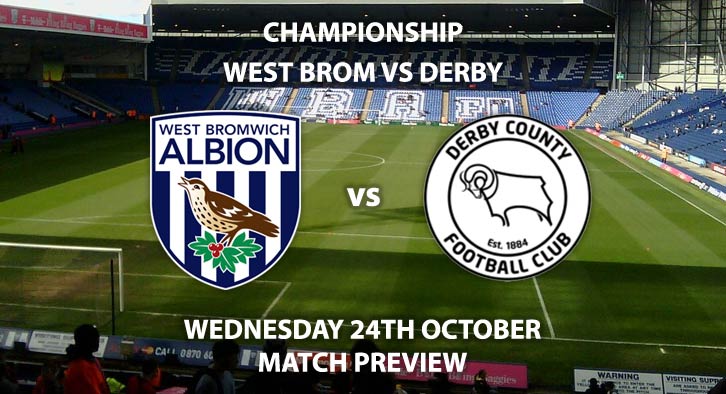 Showcasing the strength of the Championship, a team newly relegated from the Premier League in West Brom face a side that have already knocked Manchester United out of the Carabao Cup this season. And neither are even in the automatic promotion places.

Not for the want of trying though. After an excellent start to the season, in which they have already smashed in a league-leading 31 goals, West Brom are third. That is just one point away from second-placed Sheffield United. The same Sheffield United that Derby beat 2-1 at Pride Park last time out to sneak into the play-off places.

Prior to the Derby game, The Blades had won four consecutive matches, so it was a huge win for Frank Lampard’s side. Much has been made of the appointment of the former Chelsea and England midfielder, and deservedly so. Lampard has trusted in youth and got Derby playing a more exciting brand of football.

Ultimately, that has to translate into results and even though the division is inevitably tight, fifth place come the end of the season would mean a solid campaign. To maintain that position Derby will have to navigate one of the most challenging tasks this season has to offer, going to The Hawthorns. Barring a loss to Bolton, Darren Moore’s side have won every game at home this term, scoring a massive 20 goals in the process.

At the heart of the attack, Dwight Gayle and Jay Rodriguez have eight and seven goals and are second and third in the league’s top scoring chart respectively. Derby’s goals have been much more shared out, with no one scoring more than three (Mason Mount, Tom Lawrence) for The Rams.

This match will be a true indicator of promotion credentials. West Brom are the bookmaker’s favourites for promotion. Not only that, this game is almost guaranteed to contain goals. Expect the best that the Championship has to offer. West Brom have only kept one clean sheet all season, Derby have only kept three. This will be a cracker.

Referee Robert Jones takes charge of his 15th game of the season here. Jones has already amassed 50 yellow cards and a red this term so isn’t afraid to deliver discipline. His last match, Brentford losing 1-0 to Bristol City, featured that red and seven yellows.

West Brom vs Derby County will be televised live in the UK on Sky Sports Football with kick off at 20:00.

Remember to keep visiting the tips and preview area for further updates and betting previews around this weekends other domestic games and remainder European action this week.