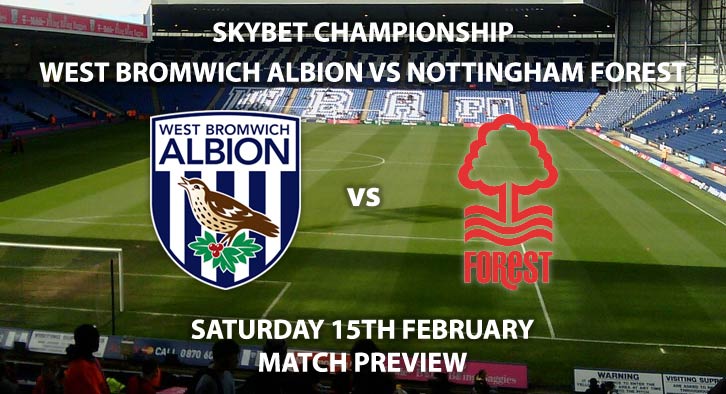 West Brom return to the Hawthorns this weekend as they host Nottingham Forest in the SkyBet Championship.

Both sides are competing at the top end of the division in a bid to to secure promotion to the Premier League, and know that from now until the end of the season slip-up’s must be kept at a minimum.

West Brom in recent weeks have got themselves back on track in the league following a sticky spell at the beginning of the year which saw them relinquish top spot on a number of occasions. Slaven Bilic’s side have won their last three consecutive matches, and have put a six-point gap between themselves and 2nd placed Leeds United. A win on Saturday lunchtime would put them nine-clear of Leeds, due to them kicking off earlier on Saturday.

Nottingham Forest on the other hand missed the chance to go second in midweek, and were beaten 1-0 at home to Charlton Athletic. In this past week Forest have proven they can beat the best in the division following their 2-0 win over Leeds on Saturday evening, but highlighted their inconsistencies in the defeat to Charlton. Sabri Lamouchi will be hoping his side can dust themselves off and find the performance levels they displayed against Leeds for this weekend’s encounter.

West Brom have lost four times in thirty-two matches this season, the fewest of any team in the division. SkyBet are offering odds of a home win at 8/11.

These two sides met in their opening fixture of the season and West Brom took all three points following a 2-1 win at the City ground. The Baggies have lost one of the last five meetings against Forest, and are unbeaten in the last three.  Forest on the other hand have won two of the last six, their last win coming in January 2010.

The referee for this clash is Keith Stroud.  The 50-year old has been on of the more lenient match officials this season, averaging just over three yellow cards per fixture in the Championship. Stroud however has awarded two red cards. For this fixture, I would recommend  minimum of 30+ booking points.

West Brom vs Nottingham Forest will be televised live in the UK on Sky Sports Action with kick-off at 19:45.