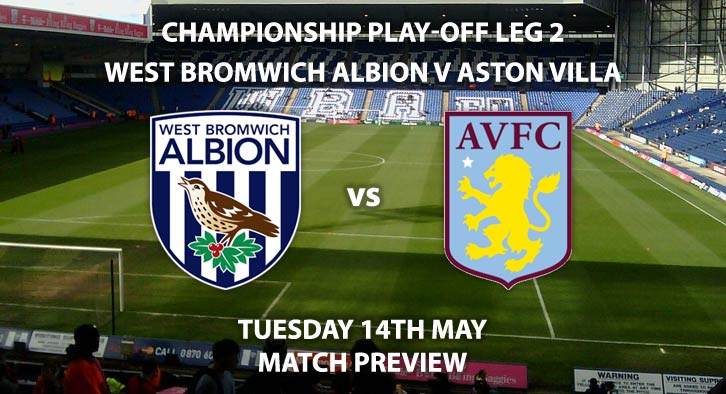 West Bromwich Albion vs Aston Villa: West Brom will need to overturn a one-goal deficit in the second leg of their Championship play-off clash with Aston Villa if they’re to have any hope of reaching Wembley.

The Baggies head into this second leg without Dwight Gayle, who opened the scoring at Villa Park. West Brom’s top-scorer will miss both this game and the final, should they get there, after receiving his second red card of the season. That will be a big blow to James Shan’s teams’ hopes of qualifying but they do still have Jay Rodriguez to call upon. After taking the lead, Albion were very defensive at Villa Park, sitting nine men behind the ball.

At home, they will have to be much more attacking, but hope they can avoid getting hit on the counter-attack. The quality they do have in attack, even without Gayle, is enough to get the goals they need. Keeping them out at the other end will be their main concern. The Baggies have won their last five home games and haven’t lost at the Hawthorns since February, which came against Sheffield United.

Aston Villa battled back superbly to take a one-goal lead into the second leg. Conor Hourihane, who was unlucky to start the game, changed the match with his introduction and grabbed the all-important equaliser. Tammy Abraham then converted a stone-wall spot-kick, to make sure of the win. Overall, Villa were poor in the first half but much better in the second, especially after the equaliser. Gayle’s absence will prove a boost for Tyrone Mings and Axel Tuanzebe, who struggled to cope with him, particularly in the first half. Dean Smith’s men have enjoyed life on the road lately and haven’t lost away since the middle of February. With that in mind, they’ll feel confident of holding onto their first-leg lead.

Chris Kavanagh is the referee for this fixture. The Englishman has officiated 35 top-flight matches this season. In that time, he has accumulated an average booking points total of 33.3. Therefore, I would advise a maximum of 60+ total points for this fixture.

West Brom will have to go hell for leather if they want to get back in this one. Their defensive vulnerabilities are always a concern though, which were again highlighted on Saturday. Therefore, I think Villa’s lead, added to their counter-attacking threat will see them progress on aggregate.

West Bromwich Albion vs Aston Villa will be televised live in the UK on Sky Sports Football HD with kick off at 20:00 BST.