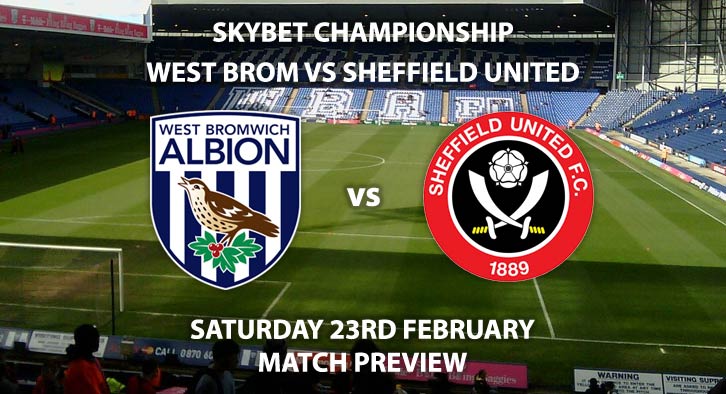 West Brom play host to Sheffield United in what promises to be a fiery affair in the SkyBet Championship.

Both teams are occupying places in the top four league positions with the hosts 4thand just one points behind the Blades in 2nd. They are also both in good form, with two wins from their last two outings respectively.

The bookmakers are struggling to call this match, with SkyBet pricing West Brom at 7/5 to win. Their last outing saw them defeat QPR 3-2 in dramatic fashion. A late winner from Jake Livermore alongside goals from new boys Jefferson Montero and Jacob Murphy made the difference. Despite those three scoring, striker Jay Rodriguez has been the main man for the Baggies with 17 league goals. He also hasn’t lost in his last five appearances against Sheffield United and is 6/4 to score anytime.

Championship matches at The Hawthorns have been entertaining for neutrals. In 14 of the 16 matches, both teams have scored. SkyBet have price boosted the odds of West Brom to win and both teams to score to 4/1.

Sheffield United are priced at 19/10 to win and make it three wins from three matches. They were rampant in their previous outing against Reading. They ran out 4-0 victors against a struggling Reading side, with Gary Madine bagging a brace. Expected to be back in action this weekend is Billy Sharp. The striker has scored 22 league goals this season and has scored in 5 straight away matches. Safe to say he in top form heading into this one and is 8/5 to score anytime.

The referee for this match will be Oliver Langford. The official has been rather lenient during his 14 Championship matches with an average of 27.1 booking points. However, this is a real promotion six-pointer and sparks could fly.

West Brom Albion vs Sheffield United will be televised on Sky Sports Football HD and kicks off at 17:30.

– These two sides can both score goals for fun, however it is near impossible to call a winner.

Odds and markets last updated on Saturday 23rd February 2019 @13:50 GMT. Keep checking back to see if there’s any updates to markets – the time stamp in the previous sentence for when we update tips on this page will be updated.