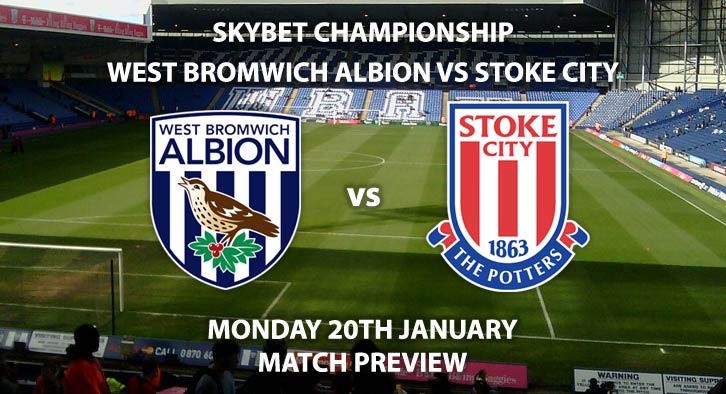 West Bromwich Albion return to the Hawthorns on Monday night as they host Stoke City in the SkyBet Championship.

Both sides will be hoping to return to winning ways after they were both held to stalemates in their most recent Championship affairs. West Brom drew 2-2 with Charlton for the second time this season, meanwhile Stoke drew 0-0 at home to Millwall.

West Brom have lost only twice in the league all season, and once in their last eighteen matches. Their defeat to Middlesbrough in December threatened to derail their surge to the Premier League, but Slaven Bilic’s side have responded in tremendous fashion. Albion have since returned to the top f the league, ne point ahead of second placed Leeds United and eight seven points clear of third placed Brentford.

Stoke on the other hand have lifted themselves out of the relegation places, and a lot of that is down to the introduction to Michael O’Neill as manager since the Northern Irishman’s arrival the Potters have lost five of his twelve Championship matches in charge, which compared to Stoke’s earlier form is a huge improvement. Stoke lost eleven of their opening fifteen matches in charge which saw the dismissal of Nathan Jones in November. The main goal for O’Neill and his players will be to secure Championship football for another season.

West Brom won this season’s earlier meeting 2-0 at the Bet 365 stadium. Albion have won the last three consecutive outings between these two sides, and impressively lost only once in the last ten. Stoke’s last win in this fixture came in December 2017, a 3-1 win at what was then the Britannia Stadium, in what was then a Premier League fixture.

The referee for this encounter is Tim Robinson. Robinson has taken charge of fifteen Championship encounters this season, accumulating a total of forty-nine yellow cards, and one red card. This considered I would recommend a minimum of 30+ booking points for this fixture.

Robinson took charge of the reverse fixture between these two sides in November, and awarded three yellow cards in West Brom’s victory.

West Bromwich Albion vs Stoke City will be televised live in the UK on Sky Sports Football with kick-off at 20:00 GMT.