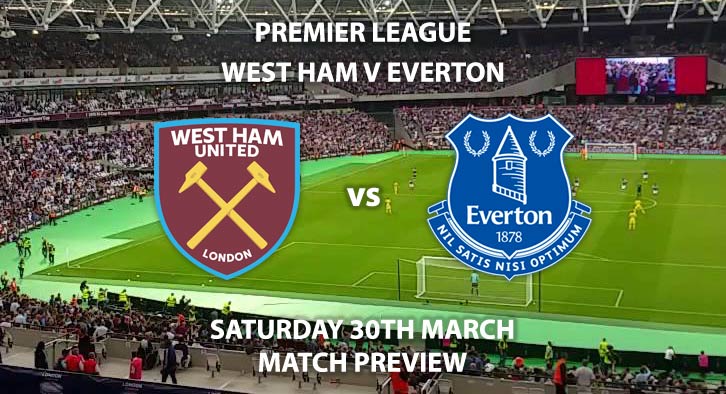 West Ham United vs Everton: The Hammers will be hoping to move up to seventh and into the European places with a win over Everton on Saturday night at the Olympic Stadium.

The Hammers come into this game ninth in the Premier League table, two points behind seventh-placed Wolves. Their recent form has been quite erratic, with three wins, two defeats and one draw in their last six outings. All three of those victories have come at the London Stadium, where they’re unbeaten in 2019. That’s an impressive run of seven games, in all competitions. Javier Hernandez was their super-sub saviour against Huddersfield Town, last time out. The Mexican’s brace in the final seven minutes secured them three points against the relegation strugglers. West Ham have only kept one clean sheet in their last ten games, which could be an area of weakness. During that run, both teams have scored in five of those ten games, which could be a good bet this weekend.

Everton headed into the international break on a high after their 2-0 win over Chelsea at Goodison Park. That result was the perfect tonic for under-pressure manager Marco Silva. It was a first home win since January, which has seen a lot of pressure heaped on him. Having surrendered a two-goal lead away at Newcastle in the previous game, a clean sheet will have come as a welcome sight to the Portuguese coach too. The Toffees are now 11th in the table, four points behind Wolves, with eight games to play. It’s not inconceivable that a strong end to the campaign could see them reach that final Europa League spot, and cement their place as ‘the best of the rest’. On the road, they have won two of their last seven games, conceding ten goals in the process.

Mike Dean is the referee for this fixture. The Englishman has officiated 36 top-flight matches this season. In that time, he has accumulated an average booking points total of 51.5. Therefore, I would advise a maximum of 60+ total points for this fixture.

These two sides are quite evenly matched, and equally inconsistent. Both have a habit of turning up with a result you don’t expect and letting you down in an ‘easier’ fixture. I’m going to side with the Hammers for this one, due to their impressive home form, but it will be tight.

West Ham United vs Everton will be televised live in the UK on BT Sport 1 with kick off at 17:30 GMT.

Odds and markets last updated on Sunday 30th March @11:50 GMT. Keep checking back to see if there’s any updates to markets – the time stamp in the previous sentence for when we update tips on this page will be updated.