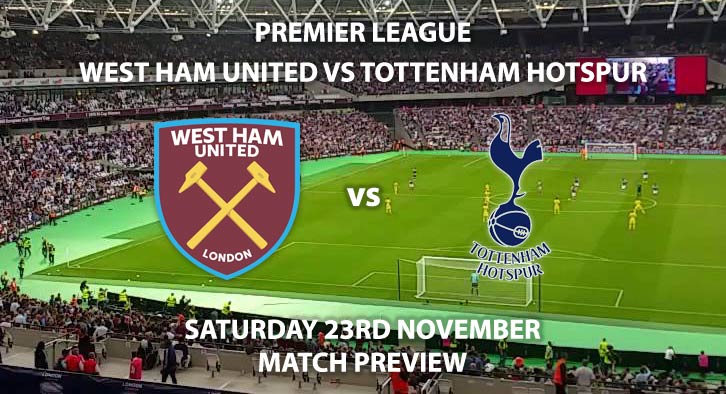 West Ham United return to Premier League action this weekend as they welcome Tottenham Hotspur to the London Stadium on Saturday lunchtime.

It’s a familiar old face in the Tottenham dugout for this one, following Jose Mourinho’s appointment on Wednesday morning. The Portuguese takes over from Mauricio Pochettino who left the club on Tuesday night, following five-and a half years in North London.

The latest International break perhaps wasn’t the worst thing for all concerned in the Hammers camp, as their early season promise had seemed to fizzle out in recent weeks. Prior to the break, Mauricio Pellegrini’s side had lost back to back fixtures, the first time that’s happened this season.

In fact, West Ham are without a win since the end of September, which was their 2-0 home triumph over Manchester United. West Ham lost only once in their opening six Premier League encounters, but that form seems a distant memory, as they have since lost four of their last five.

Their opponents Tottenham Hotspur similarly find themselves enduring difficulties in the Premier League and find themselves in 14th place in the league. Spurs are without a win in their last five Premier League clashes, dating back to their 2-1 home win over Southampton in September. Their last Premier league outing was marred by the horrific injury sustained by Everton’s Andre Gomes in their 1-1 draw prior to the International break, a tackle which saw Spurs’ Heung-Min Son red carded, a decision which was since appealed but yet to be decided on.

If the South Korean is to be suspended, then it’s even more grim viewing for Spurs’ fans. Son has been involved in a third of Spurs’ total goals this season (6 of 18 – 3G 3A) and has consistently offered attacking positivity so far this season. Son’s goalscoring total is bettered only this season by Harry Kane, who has six.

The referee for this weekends clash is Michael Oliver who most recently oversaw Liverpool’s dramatic 3-1 over Manchester City. The 34-year old has taken charge of ten Premier League matches so far this campaign, accumulating a total of 34 yellow cards. This considered, I would recommend a minimum of 30+ yellow cards for this fixture. Oliver has taken charge of matches concerning both sides this season. He oversaw Spurs’ 2-2 draw away at Manchester City where he awarded one yellow card, and most recently took charge of West Ham’s 2-1 home defeat to Crystal Palace, where he awarded 5 yellow cards.

West Ham United vs Tottenham Hotspur will be televised live in the UK on BT Sport 1 with kick off at 12:30 GMT.