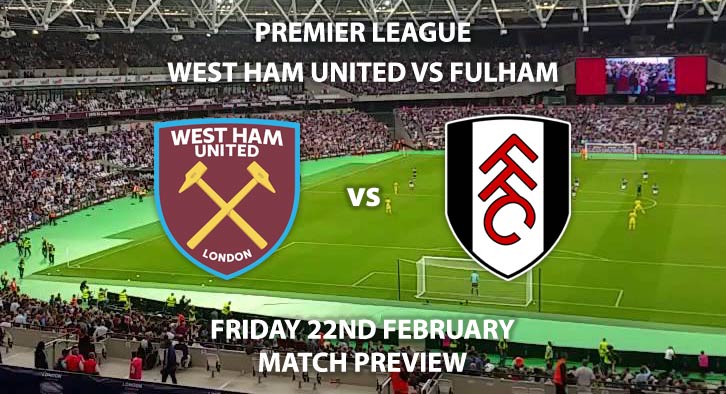 West Ham United vs Fulham: West Ham will be looking to end a run of five games without a win when they host relegation strugglers Fulham at the London Stadium on Friday night.

The Hammers haven’t tasted victory since their impressive 1-0 win over Arsenal on January 12. Since two draws and three defeats have seen Manuel Pelligrini’s side drop to tenth in the table and crash out of the FA Cup to AFC Wimbledon. In the last two games, West Ham have collected a point, against tough opposition. They’re battling performance against Liverpool earnt them plaudits, which were followed up with a draw at Crystal Palace. Long-term absentee Manuel Lanzini should be back for this one. The Argentinian ruptured his cruciate ligament weeks before the start of the World Cup, last year. Samir Nasri is also expected to play a part, whilst top scorer Marco Arnautovic is now also back in action.

Fulham have enjoyed ten days off after being knocked out of the FA Cup in the third round. Their match at West Ham begins a run of season-defining fixtures, which they need to get points from. The Cottagers face Southampton and Leicester in two of their next three fixtures after this one. With Bournemouth, Cardiff, Wolves and Newcastle their final four fixtures, it’s vital they’re still in with a chance to survive when they reach those games. Claudio Ranieri’s side sit 19th in the table, eight points adrift of safety. They have the worst defensive record in the league, after shipping 58 goals in 26 games.

Lee Mason is the referee for this fixture. The Englishman has officiated nine top-flight matches this campaign. In that time, he has accumulated an average booking points total of 35.9. As a result, I would recommend a maximum of 50+ total points, for this fixture.

West Ham will be hoping to get back to winning ways, on their own turf. Fulham are horrendous travellers and therefore I can only see this ending one way – in a home win.

West Ham United vs Fulham will be televised live in the UK on Sky Sports Premier League with kick-off at 19:45 GMT.

Odds and markets last updated on Friday 23rd February @10:27 GMT. Keep checking back to see if there’s any updates to markets – the time stamp in the previous sentence for when we update tips on this page will be updated.