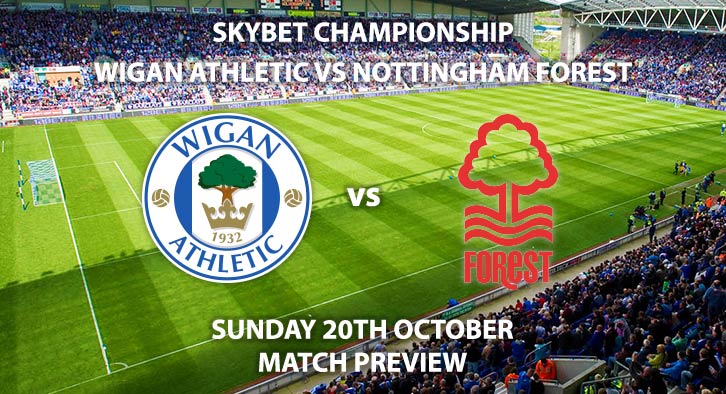 Wigan Athletic return to the DW Stadium this weekend as they host Nottingham Forest in the SkyBet Championship on Sunday afternoon.

The Latics will be hoping they can build on their slight upturn in form prior to the International break, which saw them lost only two of their last six matches; before that, the Greater Manchester side had gone on a run of four consecutive defeats. Their opponents Nottingham Forest are enjoying a fantastic opening to this campaign, where they currently sit 2nd in the Championship standings, but are level on points with league leaders West Bromwich Albion. Forest have lost only once in the league this season; the opening day defeat to West Brom.

Compare that to this stage of proceedings last season, Forest were sat in 5th place with sixteen points. Sabri Lamouchi’s introduction to Championship management couldn’t be going too much better, and the Frenchman and his side have got Forest fans believing this may well be the season which propels them back to the big time.

Paul Cook’s Wigan side will be hoping for an improvement on last seasons finish of 18th place, where they finished 12 points above the relegation zone; which will have been the primary objective following their promotion from League 1 the season before, to secure Championship football for the following season. If Wigan are to build on last seasons bottom half finish, then their form at the DW Stadium must be bettered. The Latics won eleven times on home soil last season and drew eight. Turning them draws into victories is the next step for Paul Cook’s side, which is what will certainly help them climb higher this season.

The referee for this weekends clash is Matthew Donohue. This is the Englishman’s first season officiating in the Championship, and in his six appearances so far this season he has awarded twenty-eight yellow cards. Because of this, I would suggest a minimum of 30+ yellow cards. Donohue is yet to oversee a Nottingham Forest match this season but did officiate Wigan’s 3-1 defeat to QPR in August, where he awarded six yellow cards that day.

This match will be shown live on Sky Sports Football, with kick off scheduled to take place at 14:00 BST on Sunday afternoon.