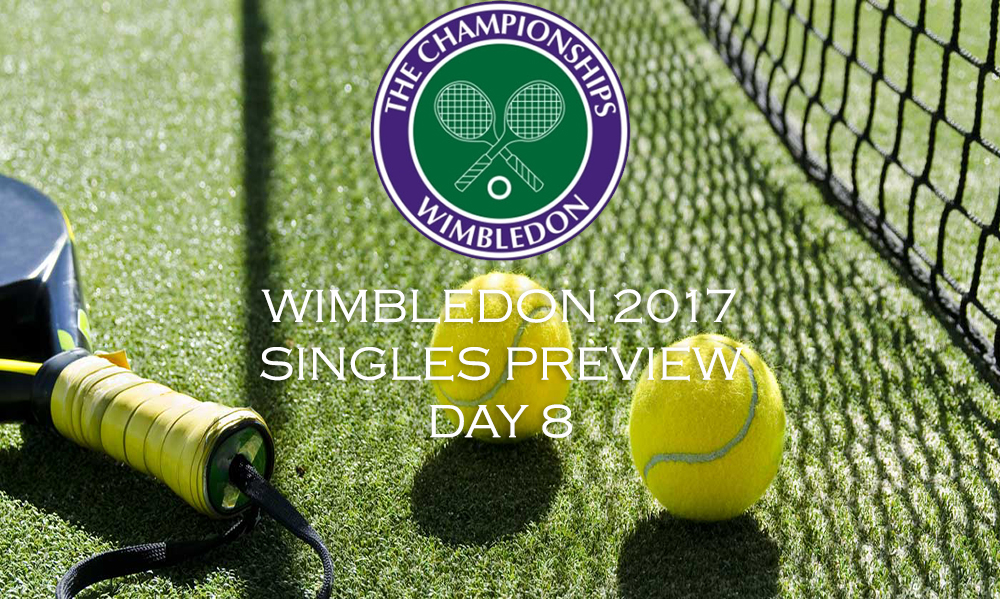 Wimbledon Day 8 – Single’s Preview – The quarter finals are here! Tuesday brings the start of the fifth-round, starting with the Women’s singles. With tension high, who will come out victorious and secure a place in the last four?

Here’s a look at the action on day eight of Wimbledon.

Konta became the first British female to reach the quarter finals of Wimbledon for 33 years with her fourth-round victory. She beat Caroline Garcia 7-6, 4-6, 6-4 to make it through to the last eight, making this her best Wimbledon tournament. The world number seven will take part in only her third grand slam quarter-final, and reached this stage of the Australian Open earlier in the year.

Her opponent Halep is now the highest seed left in the competition, ranked second. She came out on top in her fourth-round tie beating Victoria Azarenka in straight sets, 7-6, 6-2. The Romanian reached this stage of Wimbledon last year, and will be hoping to go one better to make the semi-final. She was recently runner up at the French Open, and got to the quarters of last year’s Australian Open.

Williams came through her fourth-round tie unscathed and she won in straight sets. She beat Ana Konjuh 6-3, 6-2, to secure only her first third Wimbledon quarter final since 2010. The American has dropped only one set in her four games so far this competition, and has won her last two in straight sets.

Ostapenko also came through her game in straight sets. The Latvian beat Ukraine’s Elina Svitolina 6-3, 7-6 to set up her tie with Williams. Ranked 13th in the world, she comes in to the tournament in good form, having recently won the French Open, her first ever grand slam win.

World number fifteen Muguruza caused the biggest shock of this year’s tournament, knocking out world number one Angelique Kerber in round four. The Spaniard came out 4-6, 6-4, 6-4 winner to set up her second Wimbledon quarter final in five years. She also reached this same stage of the Australian Open earlier in the year.

Kuznetsova herself is world number eight, and came through her fourth-round match in straight sets. She beat Agnieszka Radwanska 6-2, 6-4 to reach her first Wimbledon quarter final since 2006. This is quite the resurgence from the 32-year-old who may be wondering if this is her last chance to win her first ever grand slam.