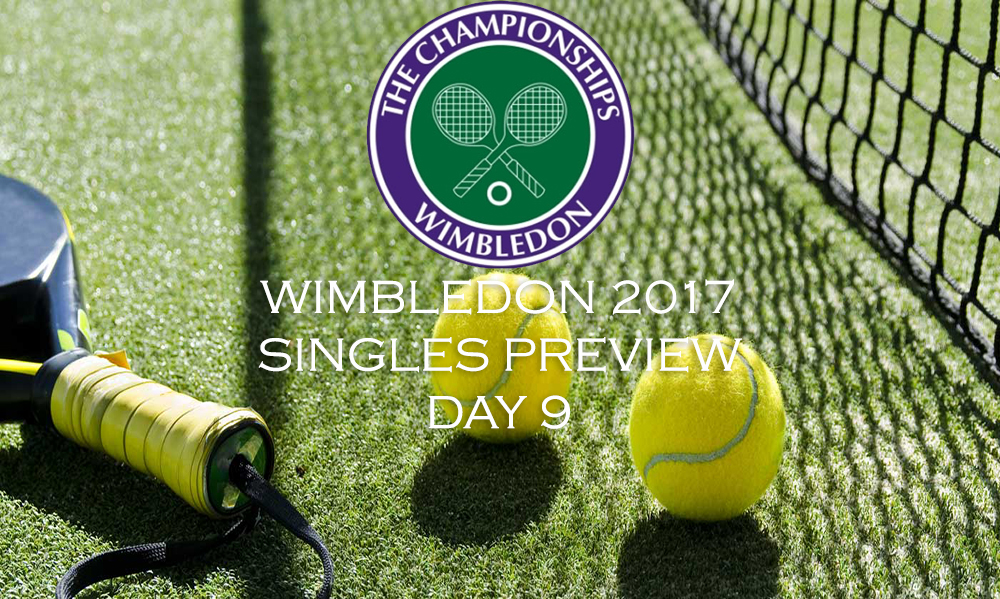 Wimbledon Day 9 – Single’s Preview – Wednesday marks the beginning of the Men’s singles quarter-finals. After Rafael Nadal was sensationally beaten by Giles Muller in a five-set thriller, the competition is at boiling point. As a result of yesterday’s match on number one court, Novak Djokovic’s game against Adrian Mannarino was moved to Tuesday, and the Serb went through to the Quarter Finals with a straight sets win and will see him face Thomas Berdych in the last eight.

Here’s a look at all the action to come on day nine of Wimbledon.

Murray continued the strong defence of his Wimbledon title by dispatching of Benoit Paire in straight sets. The world number one made sure of his place in the last eight, coming out 7-6, 6-4, 6-4 winner. The Scot has made it to the quarter finals every year since 2008, but will be hoping to reach his eighth semi-final in nine years.

Querrey has gained quite a reputation for himself as an underdog at Wimbledon. After sensationally beating then reigning champion Djokovic last year, the American reached the quarter-final, a feat he has again repeated this year. On his way to the last eight, he has beaten Joe Wilfried-Tsonga and Kevin Anderson, proving he is very capable of producing an upset.

Having reached last year’s final, Raonic’s appearance in this year’s last eight was a minimum requirement. The Canadian has come on leaps and bounds in recent years, but was taken to five sets by Germany’s Alexander Zverev. The world number seven’s class eventually saw him through, winning 4-6, 7-5, 4-6, 7-5, 6-1. Raonic is looking to secure what would be his third semi-final appearance in four years, but he could have hardly been handed a trickier rout in to the next round.

Federer unsurprisingly sealed his place in the quarter-finals with a straight set win over Grigor Dimitrov, 6-4, 6-2, 6-4. Barely breaking sweat, the Swiss took just 98 minutes to secure his place in the last eight, his 14th quarter final in the last 15 years. Raonic however is a different kettle of fish to all his previous opponents. Federer will know that he will have to be on top form to keep his Canadian opponent at bay, in order to seal his place in the semi-final.

After producing the best performance of his tennis career, Muller now finds himself in the quarter finals of Wimbledon. In an encounter that lasted just under five hours, he eventually beat world number two Rafael Nadal 6-3, 6-4, 3-6, 4-6, 15-13. The final set lasted two hours and 15 minutes, the average length of a men’s match in this year’s tournament. Muller has never reached this stage of Wimbledon, and it’s his first grand slam quarter-final since 2008.

Cilic’s route in to the last eight was slightly more straight forward than Muller’s. The Croat beat Roberto Bautista Agut in straight sets, coming out 6-2, 6-2, 6-2 winner. Cilic’s match lasted 101 minutes, compared to the 288 minutes of Muller’s, showing how much of a slog the tie was. Cillic has reached the quarter final of the competition every year for the last four years, but has never made it to the last four.

SKYBET: CILIC TO WIN AND BOTH PLAYERS TO WIN A SET- 5/4

Djokovic only played yesterday, due to the Nadal/Muller match over running. Frenchman Mannarino did his best against the world no.4 but could not get past him, as he lost 6-2, 7-6. 6-4. Djokovic now has to face Berdych with less than 24 hours rest, something that could hinder the Serbs chances.

Berdych and Djokovic will be meeting for the 28th time, with the Serb winning 25 of those matches. Berdych, however, has beaten Djokovic at Wimbledon in the 2010 semi final, on his way to his only Grand Slam Final. Will Djokovic be able to keep up his record of not dropping a set this tournament?

SKYBET: DJOKOVIC TO WIN THE MATCH, MOST ACES AND LEAST NUMBER OF DOUBLE FAULTS – 8/1