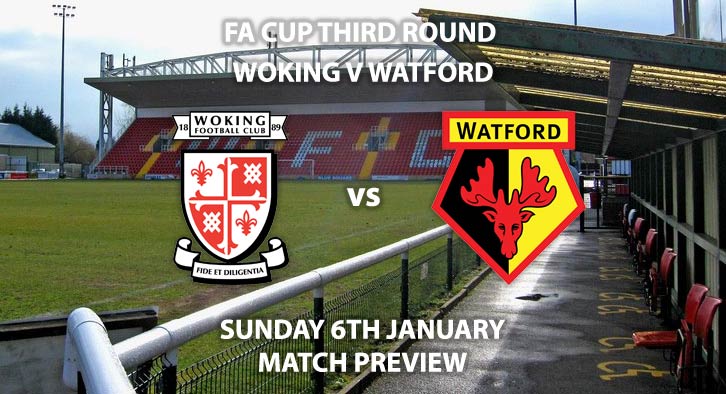 Non-league Woking will have the match of their lives on Sunday as they face Premier League Watford in FA Cup action.

The beauty of the FA Cup allows teams like this to play each other with so many leagues between them. Currently 2ndin the National League South, the home side are in the sixth tier of English football. Meanwhile, Watford are 8thin the top tier of the English leagues. Quite the difference.

The non-league outfit are priced at a huge 12/1 by SkyBet to pull off a miracle. Woking have had an impressive season both in the league and cup. They are currently second in the league behind Torquay who they beat in the first proper round of this competition.

They then narrowly defeated Swindon at home thanks to a Jake Hyde goal. Hyde has eight goals in the league so far and is 10/3 to score anytime against Premier League Watford. Defensively Woking are a well drilled side. They have six clean sheets in their last ten matches in all competitions. If Woking do get a goal and then sit back to defend it and win to nil, you will get odds of 28/1 from SkyBet for that to happen.

Watford are huge favourites for this match and are priced at 2/9 to win this match. Watford are fresh from their dramatic 3-3 draw with Bournemouth however it is unlikely many of the starting eleven from that match will feature this Sunday.

Troy Deeney bagged a brace however he is likely to be rested. Stefano Okaka and Andre Gray stand good chances of playing and they are both 1/1 to score anytime if they do feature. Watford have failed to keep a clean sheet in their previous three matches. They are priced at 7/4 to win and both teams to score.

The referee for this match will be Graham Scott who averages around 30 booking points a game.With so much at stake for Woking, I’d expect them to come into the match rather abrasive and look to match Watford physicality and get some cards in the process.

Woking vs Watford will be televised on BT Sport 2 in the UK and kicks off at 14:00 GMT.

– I don’t expect to see the strongest Watford side played but they still shouldn’t have too much trouble.

Remember to keep visiting the tips and preview area for further updates and betting previews around today and tomorrow’s FA Cup Third Round Action.