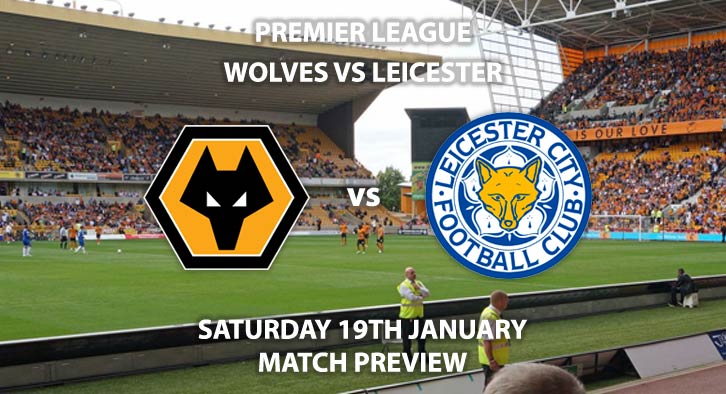 Wolverhampton Wanderers vs Leicester City – Wolves host Leicester at Molineux in what could be a big game as both sides battle to finish seventh in the Premier League.

Wolves come into this game in 11th place, just two points but three places by their visitors. They were beaten 3-0 on Monday night by Manchester City, although they spent most of the match with ten men. Willy Boly was sent off after just 19 minutes and will subsequently miss this game.

Wolves’ form has been up and down this year. They have beaten/taken points from all of the top six, but tend to struggle at home to the smaller sides. Huddersfield, Crystal Palace and Watford have all won at Molineux this season, whilst Cardiff, and Fulham have both taken points from them on the road. Nuno Espirito Santo’s side are all but safe this year – bar a major catastrophe – so their aim is to finish as high as possible. They’re only three points behind Watford in seventh and will have strong ambitions to finish as ‘the best of the rest’.

Leicester manager Claude Puel comes into this game under pressure, despite recent wins over Chelsea, Everton and Manchester City. Back-to-back defeats against Newport County in the FA Cup and lowly Southampton at home have resurfaced some of the ‘Puel out’ brigade. Whilst they sit eighth in the league – and can realistically only finish seventh – the Foxes’ faithful have pointed to the style of football and Puel’s inability to field a strong side in the cup, as the reasons for their frustrations. They are inconsistent, that much is clear from their last six game, but they can’t do much more, in the League. Southampton sacked Puel despite finishing eighth but now are embroiled in relegation dog-fights year on year, so Leicester fans might be careful what they wish for.

Chris Kavanagh is the referee for this fixture. The Englishman has officiated 11 top-flight matches this season. In that time, he has accumulated an average booking points total of 34.1. Therefore, I would advise a maximum of 50+ total points for this fixture.

Wolves have a poor record at home against the lower-placed sides, so a win would help to dispel that run. Leicester need a win to ease the pressure on Puel from the fans and I think this one will finish all square, as a result.

Wolverhampton Wanderers vs Leicester City will be televised on Sky Sports Premier League and kicks off at 12:30 GMT.