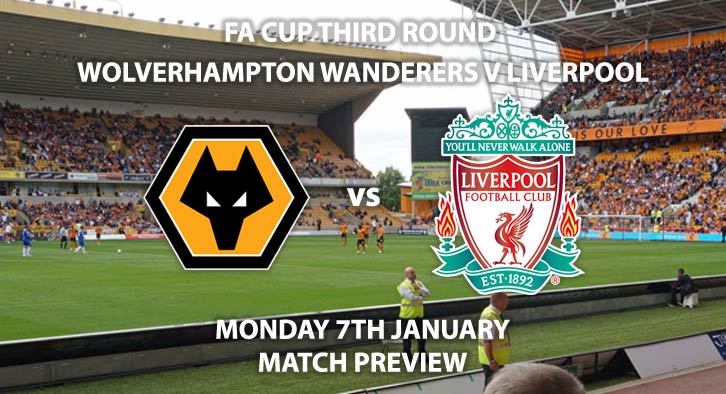 Wolverhampton Wanderers vs Liverpool – Premier League leaders Liverpool turn their attention to the FA Cup on Monday night when they take on fellow top-flight side Wolves at Molineux.

Jurgen Klopp’s suffered their first defeat of the season on Thursday night as they lost 2-1 against Manchester City. That result cut the Reds’ lead over City to four points. Liverpool never really got going and struggled to win the battle in midfield. Klopp reverted to last season’s 4-3-3 set-up, which didn’t suit them. Liverpool looked far more settled in the 4-2-3-1 formation, which they changed to and that saw them equalise through Roberto Firmino. With that in mind, I’m expecting them to shape up in that system, with Xherdan Shaqiri likely to come back into the team.

Klopp’s personnel selection will illustrate where the FA Cup lies in his list of priorities. They will have to be on form to beat a strong Wolves side, renowned for toppling the top sides. However, they will be buoyed by their 2-0 win in this fixture just last month, in the league.

Wolves suffered a surprise 2-0 defeat to Crystal Palace at the weekend, which sums up their current form. That came off the back of a 3-1 win over Tottenham, which highlights their inconsistencies. Wolves have taken points from all of the ‘big six’ this season, Nuno Espirito Santo’s side are not to be underestimated. They have only lost to Liverpool and Spurs at Molineux, out of the top six, and will be hoping to avenge that result on Monday.

These two sides also met two years ago at Anfield, in the FA Cup third round, with Wolves securing a famous 2-1 win under Paul Lambert.

Paul Tierney is the referee for this fixture. The Englishman has officiated 11 top-flight matches this season. In that time, he has accumulated an average booking points total of 40. Therefore, I would advise a maximum of 50+ total points for this fixture.

Liverpool will be desperate to bounce back from their defeat on Thursday, although I’m unsure how strong a side they will field. Wolves have little to play for in the league, so they should be full strength.

I think Liverpool will just edge this one, but don’t be shocked if it goes to a replay.

Wolverhampton Wanderers vs Liverpool will be televised live in the UK on BBC One and kicks off at 19:45 GMT.

As always we don’t recommend covering every single pick – from the RequestABet selections we advise covering up to 3 bets depending on your budget. Odds and markets last updated on Monday 6th January 2019 @17:28 GMT.