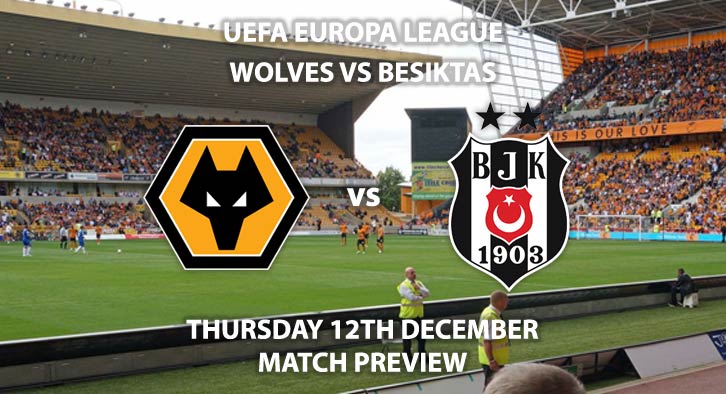 Wolves return to the Europa League on Thursday night as they host Besiktas at Molineux.

Nuno Espirito Santo’s side have already secured their passage through to the knockout phase, but the prospect of qualifying as group winners is still achievable.

If Wolves are to finish top of the group, then they will need to rely on Slovan Bratislava to take points off leaders Braga. Braga are currently unbeaten in the group stage, winning three and drawing two of their five matches.

Wolves are currently one point behind the Portuguese side heading into the final matchday in group K.

Their opponents Besiktas have endured an underwhelming Europa League campaign, and with defeat could finish bottom of the pile. The Turkish side have won one and lost four of their group matches this campaign, managing only six goals.

Sundays thrilling 2-2 draw with Brighton saw Wolves extend their unbeaten run in the Premier League to eleven matches. Including the Europa League, as well as English cup competitions makes even better viewing for Wolves fans. Wolves are unbeaten in eighteen matches in all competitions.

Besitas’ form in the Turkish Super Lig is a huge contrast to their Europa League exploits. The Turkish side are currently 2nd in the league, and only three pints behind leaders Sivasspor. Besiktas are unbeaten in their last ten matches, excluding the Europa League.

The earlier group meeting between the two saw Wolves win 1-0 in Turkey. Willy Boly’s 93rd minute winner secured all three points for Wolves back in October, and it was the result which kick-started Nuno’s sides Europa League surge.

Talisman Raul Jimenez is ruled out for Wolves through suspension. Nuno is expected to make a number of changes for Thursdays clash, with a number of youngsters poised to feature. Wolves have a big game on Sunday when they face Spurs, so resting some senior players will certainly do them no harm.

The referee for this fixture is Andris Treimanis from Latvia. The 34-year old has taken charge of two Europa League matches so far and has awarded eight yellow cards and no red cards. This considered, I would recommend a minimum of 20+ booking points for this fixture.

This match will be shown live on BT Sport ESPN, with kick-off scheduled to take place 20:00 GMT.