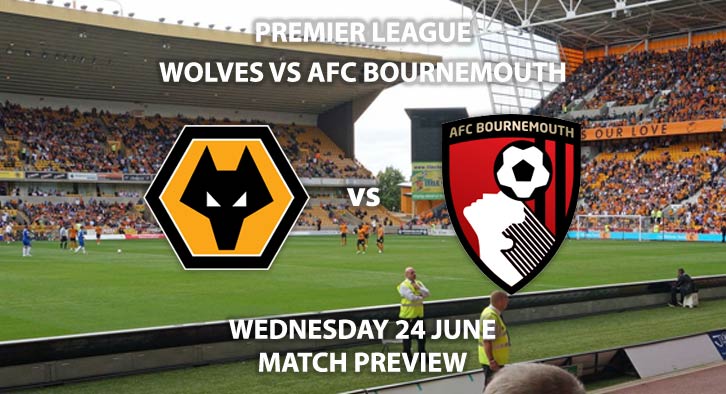 Wolves will host Bournemouth in Premier League action this Wednesday evening with three points vital to both sides.

Wolves are currently sixth in the league table and well in the race for European football next season. They kicked off their return to the pitch with a 2-0 victory over relegation-threatened West Ham. Meanwhile, Bournemouth are currently in the relegation zone after a 2-0 defeat to Crystal Palace on the weekend.

Wolves are favourites for this match and are priced at 3/5 to win the match by SkyBet. The hosts are unbeaten in six Premier League matches and boast an incredibly impressive defeat record this season. They have lost just six of their 30 topflight matches, with only Liverpool having lost less.

In attack, Raul Jimenez has been his usual potent self and has 14 goals so far this term. He is priced at 14/5 to open the scoring on Wednesday night.

Bournemouth are in desperate need of a positive result and are priced at 19/4 to pull off a shock victory at Molineux. Eddie Howe’s side look stuck and out of ideas as they face a tough battle to retain their Premier League status. Whilst injuries have been cruel to the Cherries, their form has still been dire with nine losses from their last ten away matches. Wolves will likely prove too tough a test for the Southerners to claim any points.

Going forward, Callum Wilson has been their source of goals with eight in the Premier League. He is priced at 16/5 to score anytime.

Last time these two met, two goals from Joao Moutinho and Raul Jimenez were enough to claim a a 2-1 victory for Nuno Santo Espirito’s side. 65 booking points were brandished as Simon Francis was awarded a first half red card. SkyBet are offering 4/5 for 40+ booking points this time out.

– The home side should breeze through this match as form reads that there will only be one winner.