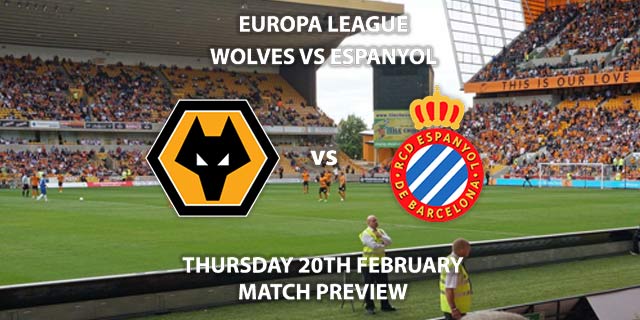 Wolves return to Europa League action this week when they welcome Espanyol to Molineux on Thursday night.

Having come back from a much-needed winter break, Wolves played out a 0-0 draw with Leicester City at Molineux on Friday evening. Nuno Espirito-Santo’s side have played more football this season than any other Premier League team, but have had almost a week in preparation ahead of this fixture.

Espanyol haven’t quite had that luxury and have been playing week in week out in Spain’s La Liga, where they currently sit rock bottom. Despite their standing, the Spanish side have lost only one of their last four, winning one and drawing two. Abelardo Fernandez’s side finished top of Group H in the Europa League, where they lost only once.

Wolves finished second in Group K behind Portuguese side Braga. They lost only one of their six group matches, winning four and drawing the other. The defeat to Braga on the opening group night had ramifications on their standing in Group K, as had they not lost, they would have finished top of the pile.

Diogo Jota struck a hat-trick in Wolves’ last Europa league encounter, the 4-0 win over Besiktas at Molinuex. The Portuguese is priced at 7/1 to open the scoring on Thursday night on SkyBet.

Thursday night will be the first time these two sides have ever faced one another in any competition.

Espanyol ended the group stage unbeaten on the road, and picked up seven points from a possible nine away from home. Wolves’ only defeat in the group stages came on home soil, where they lost 1-0 to Brage. SkyBet are offering odds of an away win at 19/4.

For the first time in the history of the Europa League VAR will be implemented for the last 32, and will continue until the end of the competition.

Wolves vs Espanyol will be televised live in the UK on BT Sport / ESPN with kick-off at 20:00 GMT.