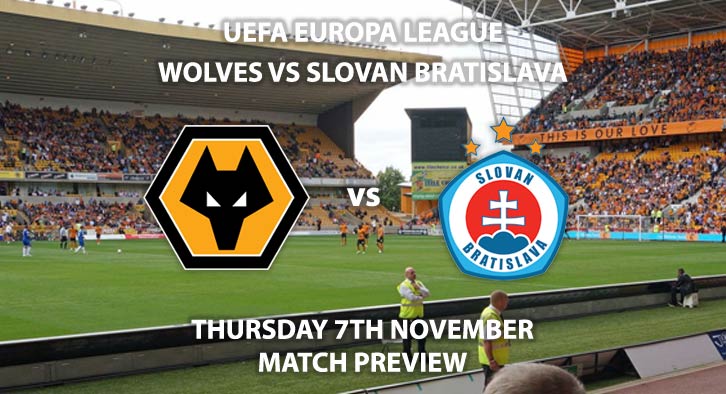 Wolves will host Slovan Bratislava in the UEFA Europa League this Thursday night.

In the reserve fixture of this match, Wolves came out victorious away from home thanks to second half goals from Romain Saiss and Raul Jiminez. It is still all to play for in Group K with Wolves and Bratislava in second and third place respectively.

Wolves are priced at 4/11 to win the match by SkyBet and put themselves in the driving seat for the knockout stages. Nuno Espirito Santo’s side are still hunting down Braga in top spot in the group. In recent weeks, Wolves have not had too many issues in front of goal. They have scored in each of their last ten Premier League matches. The man finding his feet recently is Raul Jiminez. The forward will have a lot of pressure on his shoulder now with the absent Diogo Jota, who picked up a red card last round. Jiminez is 16/5 to score first.

Slovan Bratislava are priced at 7/1 to win and get their revenge from the 2-1 home defeat a couple weeks back. Apart from their loss to Wolves a couple weeks back, the Slovakians are in great form heading into this match. They have just one loss in their previous 12 matches in all competitions. They also have the competitions current top goal scorers in Andraz Sporar. He is priced at 16/5 to add to his four goals already in the Europa League.

The referee for this match will be Dutch official Bas Nijhuis. In the last match between these two, there were 85 booking points brandished. With a lot on the line, we could have another feisty affair – this time at Molineux. There should be at least 50+ booking points.

Wolves vs Slovan Bratislava will be televised on BT Sport ESPN and kicks off at 20:00.

With a lot on the line, it will come down to small margins and home advantage could be key.