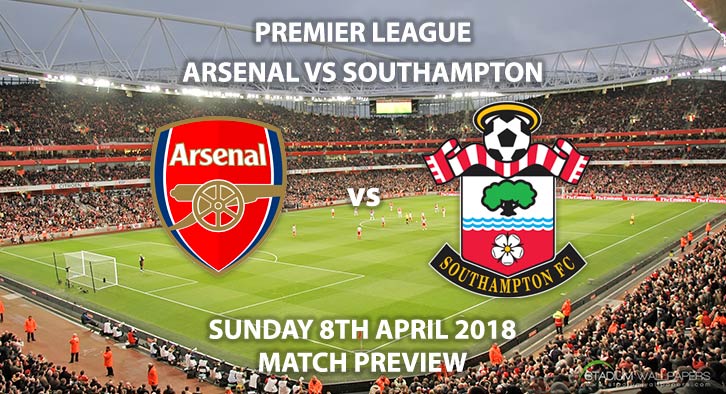 Arsenal vs Southampton: Arsenal host relegation-threatened Southampton at the Emirates looking for a fifth straight win on the bounce.

The Gunners claimed an impressive 4-1 win against CSKA Moscow in midweek, in the first leg of their Europa League quarter-final. That victory sets them up nicely for their trip to Russia next Thursday. Alexandre Lacazette followed up his goal last weekend with another two in that game, taking the Frenchman to 12 goals for the season. After missing a large chunk of the campaign through injury, the question posed to Arsene Wenger is, how does he fit both Lacazaette and Aubameyang in the same side? Since arriving from Borussia Dortmund in January, the Gabon international has performed well. He showed a level of unselfishness last weekend to allow Lacazette to take their penalty, despite being on a hattrick. I think together, they could be a powerful duo.

In order to fit both in as central strikers, Wenger would need to switch to a back three. With Mesut Ozil also in the side, there’s no way they could do it with a back four. Wenger is not averse to playing this formation, having done so for large portion earlier in the season. This would also reduce the defensive responsibilities of the German. If Arsenal can recruit the correct defenders to fit this formation in the summer, I could see them becoming a dangerous pair up front.

Southampton are in big trouble. Despite boasting one of the most talented squads in the bottom half, they find themselves in the relegation zone. Last week, they were alarmingly beaten 3-0 by fellow relegation-strugglers West Ham. That result has only increased the panic on the South Coast, with the Saints set to face Arsenal, Manchester City and Chelsea before the season is out. They are only two points adrift of safety, with a game in hand but with games running out, Mark Hughes’ men need points on the board.

Andre Marriner is the referee for Sunday’s clash at the Emirates. The Englishman has an average booking points total of 27.8, one of the lowest in the league. Whilst Southampton are fighting for their lives, these teams don’t rank high amongst the league’s most carded sides. As a result, I would avoid betting on booking points, to a maximum of 30+ for both teams.

Southampton are desperate for a performance, as much as a result. They’ve shown little fight as of yet. Even if that does improve this weekend, I don’t see them getting a result. I fancy Arsenal to seal another home win, grabbing a couple of goals in the process.

Arsenal vs Southampton will be televised live in the UK on Sky Sports Football with kick-off at 19:45.

Odds and markets last updated on 8th April 2018 @12:50 GMT. Markets may be updated prior to kick off so keep checking back before kick off for any further updates or markets.