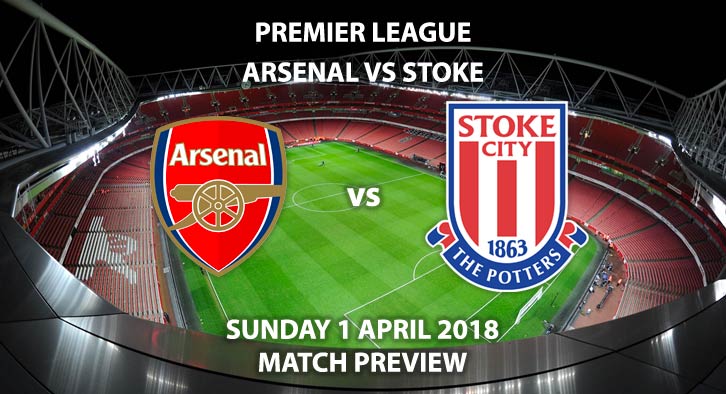 Arsenal vs Stoke: Arsenal host relegation-threatened Stoke City on Sunday looking to close the gap between them and the top four.

The Gunners come into this game in sixth place, 13 points adrift of Tottenham. Whilst any realistic hopes of finishing in the top four have disappeared, the Gunners could still make a late surge for Champions League football. The Europa League could also be a fruitful route to Europe’s elite competition. The quarter-final draw has matched them up with CSKA Moscow. On paper, this appears an easier tie than their last round against AC Milan. There’s no reason why they shouldn’t advance into the semi-finals as they look to win the competition. In the league, Chelsea host Tottenham at 4pm, which means at least one side will drop points. Thus, a win for the Gunners at 1:30 could see them close the gap on the teams above them.

With just seven league games remaining, Stoke are in desperate need of wins. The Potters sit three points adrift of West Ham and Crystal Palace with both those two sides holding a game in hand. Stoke still have to play both those two sides before the season ends, so it is imperative they give themselves a fighting chance. It’s imperative they are still in touch with the sides above them when these fixtures come around, meaning they need to pick up points elsewhere. After seven games without a win and back to back home defeats, Stoke need to start showing signs of improvements. Their squad is more than capable of getting out of this mess but with time running out they need points on the board.

Despite winning in this reverse fixture earlier this campaign, Stoke have won just one of their last six games against Arsenal. They have never won at the Emirates, with their last away victory coming back in 1981, almost 27 years ago.

Craig Pawson will be hoping to continue his fine run of form when he takes charge of this Sunday lunchtime match. Pawson has the highest average booking points total in the league at 41.1. He has issued 69 yellow cards across 19 league games this season and has brandished four red cards.

Arsenal tend to impress in these sorts of matches. Therefore I expect them to come out on top against a vulnerable Stoke side. My bet would be Arsenal to win by three goals or more goals.

Arsenal vs Stoke City will be televised live in the UK on Sky Sports Football with kick off at 13:30 GMT.

Odds and markets last updated on 1st April 2018 @11:35 GMT. Markets may be updated prior to kick off so keep checking back before 13:30 GMT for updates.

Keep visiting the tips and preview area for further updates and betting previews for more previews from this weekends FA Premier League and SkyBet Championship action. We’ll also be posting this weeks Champions League games up from Monday so keep an eye out for those.