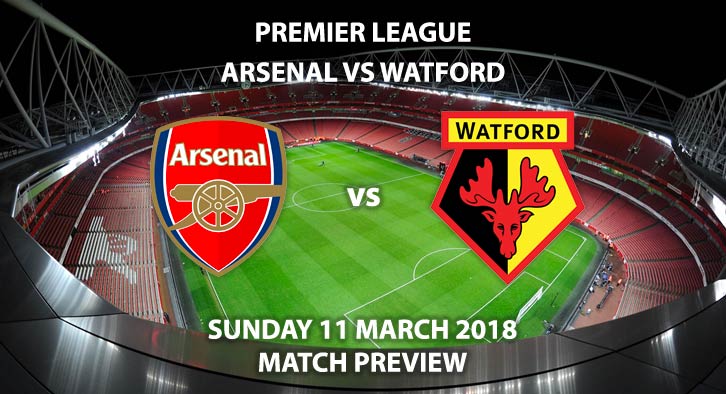 Arsenal vs Watford – An out of form Arsenal host Watford this Sunday afternoon in Premier League action.

Arsene Wenger’s side have been abysmal lately with the Frenchman’s 21-year tenure coming to an expected crashing conclusion. The recent 2-1 loss to Brighton and Hove Albion has not impressed the Gunners fan base. They were also not at all happy with their previous performances against Manchester City both in the Premier League and Carabao Cup final.

Watford have found a new lease of life under manager, Javi Gracia, who has led the club to a much more stable position. Their recent Premier League outings has seen them defeat Chelsea in a devastating 4-1 victory as well as Everton and West Brom.

Arsenal are currently sixth in the Premier League and couldn’t be further from the top four action. They are 13 points adrift from fourth place Tottenham Hotspur and the ‘Wenger Out’ brigade is yet again in full flow. Despite their disappointing campaign, they have proven to be hard to beat at the Emirates Stadium. They have scored two or more goals in 78% of their home matches this season. The Gunners are without a recognised goal scorer since Alexis Sanchez’ departure. Although Alexandre Lacazette has scored nine in the league, he is out of favour to new by Pierre-Emerick Aubameyang.

Arsenal’s defenders have endured a tricky few weeks with plenty of media attention.. Their, at times, comedic defending has not gone unnoticed and has been brutally scrutinised in the past few weeks. They have managed a clean sheet in 31% of their Premier League matches.

Watford are currently ninth in the Premier League. They have been a rather inconsistent side however they have managed to pull away from the hectic bottom half. The Hornets are few points ahead of the relegation scrappers on 36 points. Their defensive record against the top six doesn’t make for pretty reading despite their recent victory over Chelsea. who have only managed a clean sheet in 27% of their league matches this season.

Going forward, their attacking prowess is a factor that Gracia has massively improved. The likes of Richarlison, Troy Deeney and Abdoulaye Doucoure have been very prolific and exciting to watch. They have led an attack that has scored two or more goals in 50% of their away Premier League matches.

Arsenal vs Watford will be televised live in the UK on Sky Sports Football with kick off at 13:30.