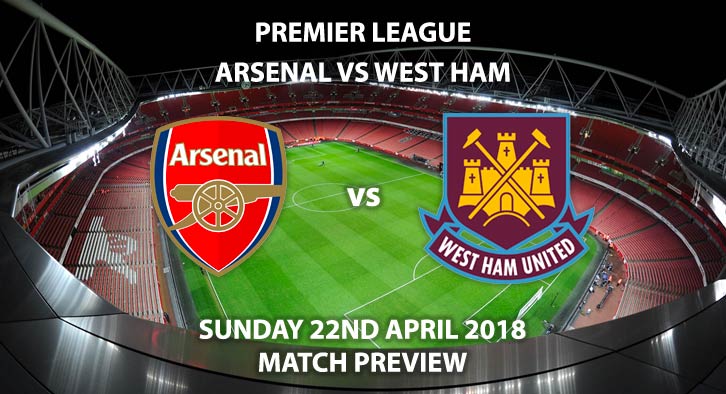 Arsenal vs West Ham United  – The Arsenal crisis of a month ago has eased considerably. Yet it takes only one bad performance and result  to reignite the flames of protest among their supporters.

Arsene Wenger, as ever the centre of everybody’s attention in respect of his 21-and-a-half-year reign, must be mighty glad, then, that their next fixture, against West Ham in the Premier League this Sunday, is at home.

After their latest setback on the road, a 2-1 defeat to Newcastle, left them still without an away point in 2018, Wenger and his persistently inconsistent Gunners need to restore confidence fast – on and off the pitch.

Remember, Atletico Madrid are in town next Thursday for the first leg of the Europa League semi-final – a competition that could well define and decide exactly what happens next in N5.

Winning it is the club’s only way back into the Champions League next season, with the top-four qualification route long gone – for a second year running. Indeed, the north Londoners are in more danger of failing to make the top six. Burnley sat only two points behind them ahead of their Thursday clash at home to Chelsea.

West Ham, meanwhile, continue to keep themselves away from dire trouble at the basement.

But it was a close call I their previous game last Monday when it took a late equaliser from fit-again Andy Carroll to salvage a crucial point against second-from-bottom Stoke.

That meant the east Londoners were seven points clear of the bottom three – and with talk of a long-term deal for manager Moyes in the air – there is at last some light at the end of the tunnel, and potential for progress.

Not that you should expect the visitors to upset the form guide at the Emirates – not when Arsenal are so keen to return to winning ways after a seven game unbeaten run in all competitions was ended by Newcaste.

Home win: Arsenal have won five in a row at their fortress, while West Ham have not won in five games on the road, losing four of them. The Gunners have won seven of the last eight league home meetings with the Irons.

Scorers: Arsenal’s Gabon striker Pierre-Emerick Aubameyang may not start, according to Wenger, as he is unavailable for the Europa League next week. He has scored five in his last five appearances. Hammers super sub Carroll is sure to be on the bench again, with Marco Arnautovic, three goals in last eight games, to lead the visitors’ line.

Referee Lee Mason has shown 34 yellow cards in 15 games this season – an average of 2.3 per game. He has shown two reds.

Arsenal vs West Ham United will be televised live in the UK on Sky Sports Premier League HD with kick-off at 13:30 GMT.

Odds and markets last updated on 22nd April 2018 @11:30 GMT. Markets will be updated prior to kick-off on Sunday so keep checking back.