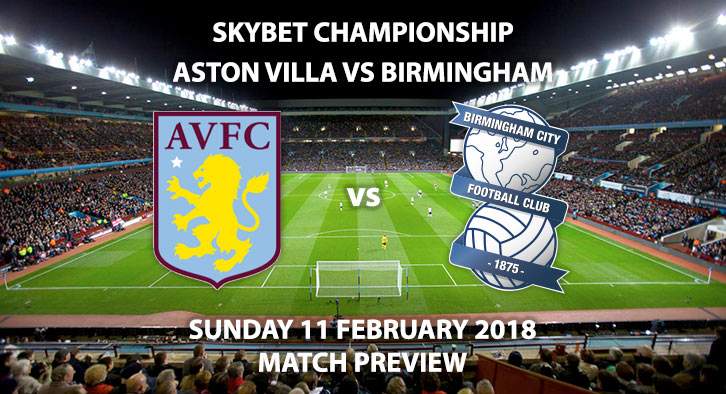 Aston Villa vs Birmingham City takes place today in what promises to be another fierce second city derby in the SkyBet Championship.

Both sides are at opposite ends of the table, the hosts, Aston Villa, are in the midst of a promotion push as they are just behind the top two spots. The visitors have found some form as of late which has seen them climb out of the relegation zone, however they will still be checking their shoulders with a lot of matches still to play.

One thing is for sure, the atmosphere will be electric.

Villa are currently third in the SkyBet Championship, just one point behind fellow promotion hopefuls, Derby County. They have accumulated 56 points from their 30 league matches with some rather impressive goal scoring statistics too. Steve Bruce’s side have scored 46 goals in their 30 matches, with Albert Adomah stealing the headlines having scored 12 goals with three assists.

Lewis Grabban has also joined the Villians on loan recently, having spent his first half of the season with Sunderland where he also scored 12 goals. In their last outing, they defeated bottom of the table Burton, 3-2, can they turn their run of four wins on the bounce to five?

Birmingham are 19th in the Championship with 30 points, from just as many games. Steve Cotterill’s side have not imposed themselves in front of goal this season however their recent form will give the Blues fans a glimmer of hope. They have taken seven points from their last three matches and striker Sam Gallagher seems to have found his feet at St Andrews.

The attacker has scored 6 goals this season and will remain Birmingham’s biggest goal threat. The blues will be hoping they can keep a clean sheet, something they have struggled for much this season having conceded 41 goals.

Can Cotterill’s men cause an upset?

Prediction – 1-1 draw.With the buzz surrounding the match and Birmingham’s recent form, I can’t see either side getting the upper hand.

Over 2.5 Goals in the Match – (link no longer available)