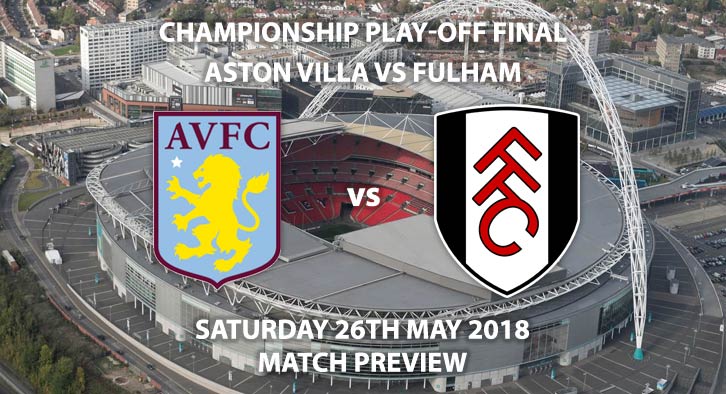 Aston Villa vs Fulham – The pair meet at Wembley with both sides desperate to secure their place in next season’s Premier League.

One of these two sides will return to England’s top flight, come Saturday evening. Branded the ‘£170 million’ game, this is bound to be a tense and nervy affair. The money riding on this game is huge, whilst there could be catastrophic financial implications for the loser – especially if it’s Aston Villa. Having spent the best part of £100M since their relegation from the Premier League two years ago, Villa are on the cusp of breaking financial fair play. Another season in the Championship would force a massive clear out as they would need to balance their extremely high wage budget.

However, Villa come into this game as favourites, in my eyes. Steve Bruce has been here and seen it all before. He has three Championship promotions to his name and was promoted through the play-offs with Hull City in 2016. On that day, his Hull side bested a relatively inexperienced Sheffield Wednesday side. It’s for that reason I make Villa favourites. They’ve got the experience of players such as John Terry, Glenn Whelan, Mile Jedinak and Robert Snodgrass. These players have played hundreds of game in the Premier League; they know how to handle a big occasion.

Fulham have gone one step closer to promotion this year, having reached the play-off final. On their day, they play the best football in the division and can beat anybody. They do, however, have a soft centre, that can be exposed. The big Wembley pitch should suit the likes of Tom Cairney, Stefan Johansen and Ryan Sessegnon. Their possession-based game can sometimes lead to keeping the ball for the sake of it, rather than passing with any purpose to their play. The real test for Fulham is to play with the same pace and intensity as they did in their second-leg win against Derby.

Anthony Taylor is the referee for this match. The Englishman has only officiated one Championship games this season, having predominantly refereed in the Premier League this season. In 27 games Taylor has an average booking points total of 35, which is around mid-table in respect to his colleagues. I don’t think this will be a great game for booking points, so I would advise a maximum of 50+.

My gut feeling says that Aston Villa will win. They have been my tip since the play-offs began, so I’m going to stick with them. Fulham could freeze on the big day, with less experienced players. Equally, they could play Villa off the park. It’s going to be a tight game, that much is for sure.

Aston Villa vs Fulham will be televised live in the UK on Sky Sports Football with kick-off at 17:00 GMT.

Odds and markets last updated on 26 May 2018 @12:40 GMT. Markets will be updated prior to kick off so keep checking back – we will update the time for when the tips were last updated when doing so.

Keep visiting the tips and preview area for further updates and betting previews around this week-ends play-off finals.