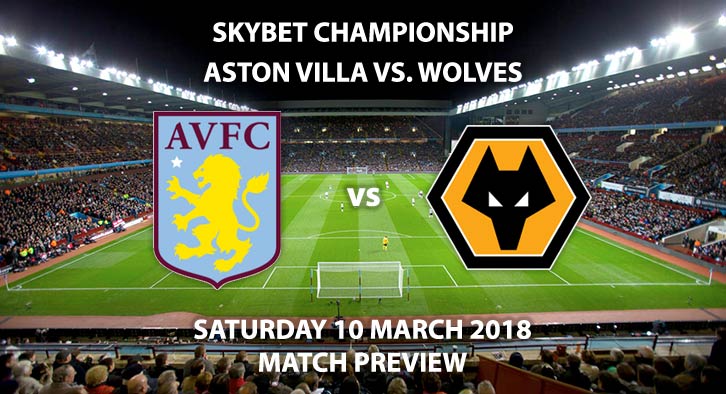 Aston Villa will host SkyBet Championship leaders Wolverhampton Wanderers this Saturday in a huge encounter at the top of the second division.

Wolves established themselves as the dominant force in the Championship very early on in the season whereas their opponents have climbed the table in impressive fashion throughout the campaign. Steve Bruce’s side have a real chance to close the gap this weekend. A gap that has been ever-so-slightly shortening in the past month.

Aston Villa are currently third in the SkyBet Championship and seven points behind their visitors. As aforementioned, Villa have climbed the table in impressive fashion and have accumulated 66 points from 35 matches. Their attack has been the main reason for their recent months of success. An attack led by Lewis Grabban, Albert Adomah and Conor Hourihane has scored two or more goals in 58% of their matches at Villa Park.

Defensively, Steve Bruce’s side have become a real tough outfit with only 32 goals conceded all season. They have kept a clean sheet in 41% of their outings this season. However, Wolves have a very prolific and dangerous attack that Villa will struggle to keep at bay.

Wolves are currently first in the SkyBet Championship on 76 points; six points ahead of second placed Cardiff. Their performances this season have been nothing short of emphatic and effective. The recent 3-0 drubbing of Leeds United showcased all the positive and exciting factors of the squad and the tactics implemented by Nuno Espirito Santo.

Their form in front of goal has been clinical and at times, devastating. They have managed to score twice or more in 55% of their league matches and have scored a total of 62 goals all season; the joint most in the league along with Fulham. Wolves’ defensive efforts have also gained plenty of praise. On the road, Wolves have managed to keep a clean sheet in 52% of their matches. With no injuries of note, attackers Leo Bonatini and Diego Jota could play key parts in Saturdays tie.

The referee for this match will be David Coote. The official, who is a unpopular choice with both sets of fans, has awarded an average of 46.9 booking points in his 21 Championship matches. The not so lenient referee shouldn’t be ruining the stitching in his pocket too much as Aston Villa have averaged only 13.2 booking points this season whilst their opponents have averaged only 17.4.

The match between Aston Villa vs Wolves will be televised live in the UK on Sky Sports Football and kicks off at 17:30.

More markets will be added over the weekend prior to the game kicking off on Saturday evening.